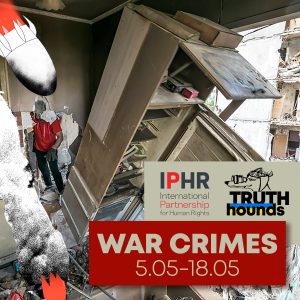 International Partnership for Human Rights (IPHR) publishes the tenth analysis in a series of publications presenting evidence of war crimes and violations of international humanitarian law committed by the Russian Federation during its campaign of military aggression against Ukraine, prepared jointly by IPHR and Truth Hounds.

During the reporting period, Russian occupying forces continued the mass theft of grain and other foodstuffs in the oblasts of Kherson, Kharkiv, and Zaporizhzhia. There were fresh reports of hundreds of dead civilians buried by Russian soldiers in mass graves near Mariupol. In Mariupol, Russian forces blocked the evacuation of circa 600 wounded Ukrainian soldiers from the Azovstal steel plant. There were new recorded instances of sexual violence, torture, and killings of civilians in the oblasts of Kharkiv and Kyiv – while they were under Russian occupation – and in the occupied Kherson Oblast. The Russian military seek out, detain, and – in some cases – kill Ukrainian veterans that fought in the Donbas. Russian forces continued to bombard eastern regions of Ukraine, pillage private and public property, and detain and deport civilians.

During the reporting period, we documented the following war crimes and violations of international humanitarian law being committed by the Armed Forces of the Russian Federation: (1) torture and wilful killings; (2) sexual violence; (3) unlawful attacks on civilians; (4) attacks on civilian objects; (5) attacks on specially protected objects; (6) impeding humanitarian relief and evacuation efforts; (7) forcible transfer of civilian population; (8) filtration camps and other cases of unlawful confinement; (9) pillage and appropriation of property; (10) environmental damage.