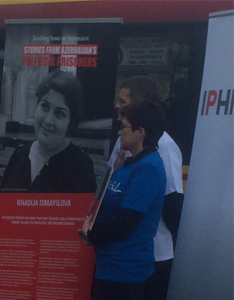 On the eve of the anniversary of the arrest of journalist Khadija Ismayilova, members of the Sport for Rights coalition and the Civic Solidarity Platform (CSP) underscore the unprecedented nature of the repression that has taken place in Azerbaijan in the year that has passed. The groups reiterate their call for the immediate and unconditional release of Ismayilova and Azerbaijan’s other political prisoners, and for the international community to take steps to hold the Azerbaijani government accountable for its human rights obligations as matter of urgent priority.

“Ismayilova’s arrest a year ago signalled an escalation of repression in Azerbaijan”, noted Karin Deutsch Karlekar, Director of Free Expression Programs at PEN American Center. “Independent voices are being silenced at an unprecedented rate, and we urge the authorities to cease the legal and extra-legal harassment of journalists and media outlets immediately”.

Ismayilova referred to the proceedings as an “express trial”, and observers noted it was rife with due process violations, with the judges rarely granting any motions made by the defence. During the trial, Mustafayev publicly told the court that prosecutors forced him to make a statement against Ismayilova, and withdrew his accusations. Additionally, Ismayilova’s lawyer told the court that her employer did not report any funds missing, that she was not authorised to hire or dismiss other journalists, and that she was not engaged in any commercial enterprise.

On 1 September, the court convicted Ismayilova of the charges of embezzlement, illegal entrepreneurship, tax evasion, and abuse of office, and sentenced her to 7.5 years’ imprisonment. She was acquitted of the charge of inciting Mustafayev to attempt suicide. On 25 November, the Baku Court of Appeals upheld this conviction, and Ismayilova was transferred to Prison Number 4 on 27 November.

Sport for Rights and the CSP consider the charges against Ismayilova to be politically motivated and connected to her work as an investigative journalist, particularly her exposure of corruption among the ruling elite. Sport for Rights and the CSP believe that in jailing Ismayilova, the Azerbaijani authorities sought to silence her critical voice before the country faced increased international media attention during the inaugural European Games, which took place in Baku in June. For this reason, Sport for Rights has referred to Ismayilova as a “Prisoner of the Games”.

“Ismayilova’s imprisonment is emblematic of the Azerbaijani authorities’ repression of independent journalists and human rights defenders”, said Melody Patry, Senior Advocacy Officer at Index on Censorship. “Every day Ismayilova and the other political prisoners spend in jail is another reminder to the world that the Azerbaijani government fails to respect and protect the democratic principles and fundamental rights it has committed to upholding”.

Besides politically motivated arrests and imprisonment, the Azerbaijani authorities continue to employ a wide range of tactics as part of an aggressive crackdown to silence the country’s few remaining critical voices. Independent online television station Meydan TV has been a particular target, with its staff and their relatives threatened, detained, and otherwise pressured in connection with Meydan TV’s critical news coverage of Azerbaijan. Other independent NGOs and media including the Institute for Reporters’ Freedom and Safety and its online television project Obyektiv TV, as well as Radio Free Europe/Radio Liberty’s Baku office, have also been aggressively targeted over the past year.

In addition to the post-European Games crackdown, the Azerbaijani authorities also worked to silence criticism ahead of the 1 November parliamentary elections. For the first time, the elections took place with almost no credible international observers, and with the majority of the traditional opposition boycotting. Independent domestic observers reported widespread fraud, such as carousel voting and irregularities in the vote counting and tabulation process. Now, in the run-up to the Formula One European Grand Prix, which will take place in Baku in June 2016, the crackdown shows no signs of relenting.

These issues and more are detailed in a new Sport for Rights report, No Holds Barred: Azerbaijan’s Human Rights Crackdown in Aliyev’s Third Term, which also contains specific recommendations to the Azerbaijani authorities and the international community on urgent measures needed to improve the dire human rights situation in the country. Sport for Rights and the Civic Solidarity Platform particularly urge the international community to sustain focus on Azerbaijan over the coming months, when critical voices will need concrete support more than ever before.