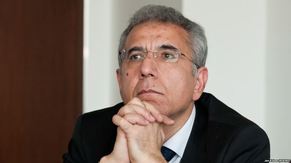 On 22 April 2015, Intigam Aliyev, an internationally renowned human rights lawyer and head of the Legal Education Society (LES) was sentenced to  seven and a half years in prison, having been found guilty of tax evasion, abuse of office and illegal entrepreneurship. The conviction, a result of politically motivated charges and a sham trial, is the most recent in an ongoing campaign by Azerbaijani authorities to silence those who criticize the repressive regime and stand up for human rights. It highlights the government’s systematic  efforts to discredit and punish civil society members  promoting respect for human rights in Azerbaijan—a tactic which has also placed other prominent human rights advocates behind bars and landed Rasul Jafarov in prison on equally trumped-up charges last week. International Partnership for Human Rights (IPHR) condemns the conviction of Intigam Aliyev and calls on the EU and the broader international community to renew and reinforce calls for an end to the crackdown on civil society in Azerbaijan.

The case of Intigam Aliyev

“There is no greater injustice than that which is perpetrated in the name of the law,” Intigam Aliyev declared after a 31 March  hearing of his case before the Baku Grave Crimes Court. With his conviction and sentencing on 22 April 2015, Mr. Aliyev fell victim to the type of injustice he was warning against. Having successfully argued a number of cases before the European Court of Human Rights, Mr. Aliyev has been a powerful force in the struggle to ensure that Azerbaijan lives up to the standards set by the international community for the protection of fundamental freedoms. His arrest in August 2014 came when several complaints regarding irregularities in the 2010 Parliamentary elections submitted by Mr. Aliyev were under consideration by the ECHR.

Intigam Aliyev is an adorned human rights lawyer and has received many accolades for his unwavering support of those who have suffered the violation of their fundamental rights and freedoms. In 2014, Mr. Aliyev, along with other prominent human rights defenders in Azerbaijan, was presented with the Andrei Sakharov Freedom Award by the Norwegian Helsinki Committee. He has also received the Homo Homini Award from People in Need, a Czech human rights organization. Mr. Aliyev is internationally respected for his tireless efforts to hold the government of Azerbaijan responsible for fulfilling its obligations under international law and has acted as an expert consultant to the Organization for Security and Cooperation in Europe (OSCE) regarding the rule of law and human rights in Azerbaijan.

A lawyer for Mr. Aliyev characterized his trial as “a vivid example of legal nihilism” – an assessment borne out by monitoring reports documenting the procedural irregularities of the hearings. Throughout the trial, judges were observed to collude with the prosecution and the motions of the defense were repeatedly dismissed. The Prosecutor alleged that Mr. Aliyev had failed to register received grants with the Ministry of Justice. However, documentation refuting their claim had been seized by the authorities during a raid of Mr. Aliyev’s office premises and home, along with case materials he had compiled for submission to the ECHR.

The EU must step up pressure

It is imperative that the EU and the wider international community forcefully and sincerely condemns the politically motivated conviction of Intigam Aliyev and calls for the immediate release of him and others held on politically motivated grounds in the country. The EU should refuse to conduct “business as usual”  with Azerbaijan’s government until it puts an end to the crackdown on civil society  and enacts meaningful reforms to safeguard free speech and other fundamental rights. With Azerbaijan economically dependent on exports to Western Europe, the EU has unique leverage to press for human rights improvements in Azerbaijan and to clearly demonstrate that it does not prioritize economic relations over human rights.   EU leaders should also consider imposing targeted sanctions against those responsible for human rights abuses in Azerbaijan and  decline to attend the opening of the European Games in Baku, unless the Azerbaijani government takes concrete and prompt steps to ensure that citizens can express their opinions without fearing reprisals.