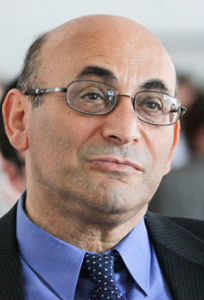 We — members of the Civic Solidarity Platform — were relieved to learn that one of Azerbaijan’s most well-known political prisoners, Arif Yunus, has been released from detention on health grounds. On 10 November 2015, the Baku City Court of Appeal granted him release under house arrest for the period of the ongoing hearings against him. However, while this is a welcome step, the legal proceedings against Arif Yunus and his wife and co-defendant Leyla Yunus on trumped-up charges continue, and Leyla Yunus remains in detention despite her serious ill health. We call for Leyla Yunus to also immediately be released from detention and for the convictions and charges against the couple to be dropped and for them to be unconditionally freed.

Human rights and peace advocates Leyla and Arif Yunus were arrested in late July and early August 2014, respectively. On 13 August 2015, they were convicted on fraud, tax evasion and other economic charges following a trial marred by irregularities and Leyla was sentenced to 8.5 years in prison and Arif to 7 years. Now the case of Leyla and Arif Yunus is considered by the appeals court. Additional charges on treason brought against the couple will be heard separately. Both of them have been subjected to ill-treatment in detention and deprived of much needed medical assistance for their health problems.

According to Nils Muižnieks, Council of Europe Commissioner for Human Rights, the case of Leyla and Arif Yunus “illustrates the pattern of repression that has emerged in Azerbaijan in recent years whereby human rights defenders are harassed through restrictive NGO legislation and selectively targeted with criminal prosecutions on charges that defy credibility.”

Yesterday’s decision by the appeals court to transfer Arif Yunus to house arrest came after his health condition deteriorated further. Arif’s lawyers requested his release on the basis of a medical examination conducted by foreign experts, who concluded that his extremely high blood pressure puts him at the risk of a heart attack. The first words of Arif after the court announced its decision were: “I am not going anywhere without Leyla”. He referred to the fact that the health condition of his wife, who has been diagnosed with diabetes and hepatitis C, has also deteriorated badly in detention. Leyla’s lawyer and others have warned that her imprisonment would effectively amount to “a death penalty”.

Arif Yunus is a well-known Azerbaijani political scientist and human rights defender. He has written extensively on Azerbaijani history and Armenian-Azerbaijani relations. He and his wife Leyla Yunus have devoted their lives to working for human rights and democratic freedoms in Azerbaijan. In 1994, they founded one of the first human rights NGOs in Azerbaijan and since that time, they have actively been addressing issues such as politically motivated persecution, corruption, human trafficking and violations of property rights. Another important dimension of the work of the couple has been to promote conflict resolution and reconciliation between the peoples of Azerbaijan and Armenia.

The case of Leyla and Arif Yunus forms part of an ongoing civil society crackdown in Azerbaijan, in the course of which dozens of civil society activists, human rights lawyers and journalists have been arrested, put on trial and convicted in retaliation for their professional activities. With this statement, we renew our call for the unconditional release not only of Arif and Leyla Yunus, but also all other activists who are unjustly held in detention or prison in the country. This pattern must be stopped. The Azerbaijani government must respect its obligations under the national constitution, as well as international human rights law.