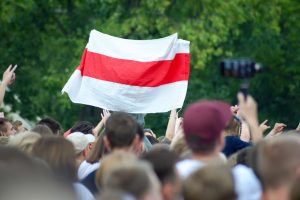 The Belarusian authorities are conducting a targeted campaign of intimidation against civil society in an effort to silence all critics of the government. Following the disputed presidential election on 9 August 2020, hundreds of thousands of people across the country took to the streets to protest the announced result. Peaceful protests continue and reprisals against protesters continue too, with frightening regularity and increasing severity. Riot police have used unlawful force, detaining thousands of people. Allegations of torture and other ill-treatment in detention are widespread. Over 33,000 people have been arbitrarily arrested for taking part in peaceful demonstrations or voicing their dissent and an increasing number are being prosecuted under trumped up criminal charges and handed prison sentences.