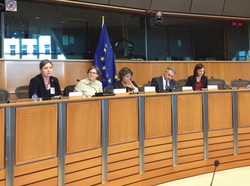 The following press release was issued by the Prove they are Alive! campaign on 27 May 2015:

The “Prove They Are Alive” campaign, working for the rights of those disappeared in Turkmen prisons and their families, held a roundtable meeting today at the European Parliament together with Human Rights Watch and the International Partnership for Human Rights on the human rights situation in Turkmenistan. The meeting was held in light of the upcoming possible ratification of a Partnership and Cooperation Agreement between the European Union and Turkmenistan. Civil society representatives called on the European Parliament to put forward strong human rights conditions for ratification of the Agreement and presented recommendations on specific benchmarks to serve as measures of progress.

The meeting was hosted by parliamentarians Heidi Hautala (the Greens) and Ana Gomes (Socialists and Democrats), who have a strong record of addressing the human rights situation in Turkmenistan.  The event was attended by members of the European Parliament, including the Parliament’s rapporteur on Turkmenistan and representatives of the European External Action Service.

A Partnership and Cooperation Agreement (PCA) between the EU and Turkmenistan has been on hold since 1999 due to well-founded EU concerns about the appalling state of human rights in Turkmenistan. The Turkmen government is one of the most closed and repressive in the world, and no progress in human rights has been made in the last 5 years. The European Parliament is scheduled vote to ratify the PCA in early September.
In connection with the upcoming ratification process of the Agreement, the NGO representatives provided an overview of the current human rights situation in Turkmenistan and offered suggestions as to how the PCA could be a more effective tool to address human rights concerns and stimulate reforms. These included the application of human rights conditionality and measurable benchmarks, which would address the most urgent problems and be feasible for implementation within one year.

Speakers stressed that Turkmenistan is closed to independent scrutiny; torture and enforced disappearances in prisons are widespread; all fundamental rights, including media and religious freedoms, are subject to draconian restrictions; and human rights defenders and other activists face the constant threat of government reprisal. The government uses imprisonment, travel bans, and other arbitrary punishment as tools for political retaliation against perceived critics, their families and associates.

“We believe that ratification of the PCA should be made conditional on the Turkmen government taking concrete steps to improve its human rights record, as outlined in the European Parliament’s April 2009 resolution on the EU-Turkmenistan Interim Trade Agreement,” said Yuri Dzhibladze, campaign member and president of the Centre for the Development of Democracy and Human Rights. “We urge the European Parliament to maintain its clear position on this issue, delay consideration of ratification for one year, and reiterate to the Turkmen government that ratification will be conditioned upon the government meeting concrete, measurable benchmarks.”

“Several laws adopted between 2010 and 2015, which the government of Turkmenistan presents as progress, have not been implemented (the Criminal Code of 2010, the Criminal Procedural Code of 2011) or establish highly restrictive provisions contradicting international standards (for example, amendments to the Law on Public Organisations of 2014, the Law on Internet of 2015, and the Law on Assemblies, Meetings and Demonstrations of 2015). All key human rights concerns raised by the European Parliament from 2008 to 2011 remain unaddressed,” said Olga Zakharova, campaign member and director of Freedom Files analytical centre.

Advocacy Coordinator of the International Partnership for Human Rights Tinatin Tsertsvadze said, “The PCA does not provide a kind of legal framework to safeguard substantial reforms. The best practices across the wider eastern region show that agreements like the PCA will have bigger impact in a country where political elites have a clearly articulated political will to reform accompanied by a concrete set of actions. To date we do not have a case where EU engagement with closed countries without conditionality has brought about change. The EU’s relations of engagement without conditionality and political dialogue provided by the PCA have not brought changes in Azerbaijan. In fact the situation has deteriorated over the course of the last years. The EU is a community based on rules and values. Engagement with Turkmenistan should be conditioned on concrete steps taken by the government.”

Lively discussion followed the presentations, and while everyone agreed that the human rights situation in Turkmenistan is one of the worst in the world, differences remain regarding which European Union strategies would be most effective to address this situation and what would work better:  the establishment of new tools for political dialogue with Turkmen authorities to more systematically raise human rights concerns, or leverage of the strong interest of Turkmenistan’s authorities in developing economic and security cooperation with the European Union and in ratifying the Partnership and Cooperation Agreement, and putting forward specific human rights conditions for its ratification. The roundtable meeting contributed to this debate and provided the European Parliament with recommendations from civil society, strongly advocating for the latter approach. The European Parliament’s position will be formed in the course of the next several weeks.

For comments and additional information: