Home Statements & Press Releases Central Asia: Curtailing rights in the name of stability. The EU must... 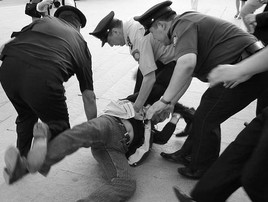 A new briefing paper published by Kazakhstan International Bureau for Human Rights and Rule of Law, Nota Bene, Turkmen Initiative for Human Rights and International Partnership for Human Rights details current trends of curtailing rights in the name of stability in Central Asia. It is crucial that the EU uses its engagement in this region to denounce these trends and to promote meaningful and systematic reforms to strengthen respect for human rights, democratic participation and access to justice as key guarantees for long-term stability.

The new briefing paper, which was used for EU advocacy in Brussels earlier this month, has been prepared by the four organizations as part of a joint project. It is based on monitoring of human rights developments in Kazakhstan, Tajikistan and Turkmenistan conducted in April 2014 to April 2015.

As documented in the briefing paper, the Kazakhstani, Tajikistani and Turkmenistani governments have increasingly portrayed alternative views and pluralism as a threat to national cohesion, values and traditions and used such arguments to justify repressive measures. This approach reflects fears on the part of the authorities of scrutiny and accountability for their policies. Developments in the wider region of the Soviet Union, in particular events in Ukraine and the recent economic downturn appear to have reinforced such fears. Legitimate security concerns have also been exploited to restrict the peaceful exercise of fundamental rights.

There is currently little space for dissent and open debate on issues of public concern in Kazakhstan, Tajikistan and Turkmenistan.

In Kazakhstan and Tajikistan, no genuine opposition parties are now represented in the parliament, and opposition groups and figures are subjected to intimidation and harassment. Independent media are also under attack, websites arbitrarily blocked, and civil society engagement impeded by problematic legislation and practice. Rather than improving human rights protection in these areas, new legislation recently adopted or initiated in the two countries (such as new provisions affecting freedom of association and assembly) has given rise to concerns of growing restrictions.

While several new laws formally aimed at strengthening freedom of expression, freedom of association and other rights have been adopted in Turkmenistan, the situation remains highly repressive in practice. There is no functioning political opposition, even if two new pro-presidential parties have emerged alongside the pre-existing presidential party, and all media and other sources of information are strictly controlled by the authorities. Independent NGOs cannot operate openly, and anyone who publicly criticizes authorities are at risk of persecution.

There are serious shortcomings in the administration of justice in Kazakhstan, Tajikistan and Turkmenistan, and guarantees for the impendence of the judiciary and fair trials are lacking. Given the difficulties to obtain justice in these countries, a growing number of petitions have been submitted to UN human rights bodies. Such bodies have also highlighted the failure of the authorities of the three countries to take adequate measures to safeguard the rights of vulnerable groups, such as women, children, migrants, and ethnic, religious, sexual and other minorities. Comprehensive efforts to combat different types of discrimination are urgently needed in the three countries.

During the meetings, the representatives of the four organizations urged the EU to use its engagement with the Kazakhstani, Tajikistani and Turkmenistani governments to insist on substantial human rights improvements that bring about real-life changes for residents and do not only amount to window-dressing. They emphasized that the EU should be consistent in its human rights messages to the Central Asian governments, speak out on human rights violations not only behind closed doors but also publicly — whenever appropriate, and condition any deeper relations with these countries on concrete steps to address current concerns. Such steps may, for example, include releasing individuals imprisoned on politically motivated grounds, refraining from implementing and repealing restrictive legislation, and implementing recommendations of international human rights bodies in practice.

In line with the Partnership and Cooperation Agreements (PCAs) the EU has concluded with four out of the five Central Asian countries, as well as it its 2007 Central Asia strategy, it holds political and human rights dialogues with the countries of this region and cooperates with them in a number of areas, including trade, energy, security and rule of law. It has opened delegations in all Central Asian countries except for Turkmenistan and provides financial assistance for reforms. At this time, the EU is reviewing its Central Asia strategy, and processes are under way to ratify a first-ever PCA with Turkmenistan and an enhanced PCA with Kazakhstan. The current EU-Tajikistan PCA entered into force in 2010.