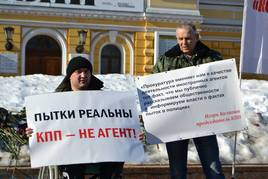 How can human rights defenders respond to an increasingly restrictive environment? International Partnership for Human Rights (IPHR) conducted interviews with activists from Russia: Natalia Taubina (Director of the Public Verdict Foundation in Moscow), Galina Arapova (Director of the Mass Media Defense Center in Voronezh) and Aleksey Mikheev (Co-founder of the Association of Torture Victims in Nizhni Novgorod).

Members of the NGO coalitions against torture and other human rights groups in Kazakhstan, Kyrgyzstan and Tajikistan operate in an increasingly insecure environment. If adopted, draft legislation currently under consideration in the three countries would further limit the space in which they can operate.

The Russian government’s approach towards NGOs, in particular the “Foreign Agents Law“, has been a source of “inspiration“ for governments and lawmakers in Central Asia. Experience gained by human rights defenders in Russia in recent years and initiatives to counter the authorities’ attempts to silence NGOs can, in turn, provide a source of ideas and inspiration to Central Asian human rights groups and citizens who wish to support the work of NGOs.

This is the third issue of the Freedom from torture newsletter that is published by the NGO coalitions against torture in Kazakhstan, Kyrgyzstan and Tajikistan, the Helsinki Foundation for Human Rights (Poland), International Partnership for Human Rights (Belgium) and the Norwegian Helsinki Committee.