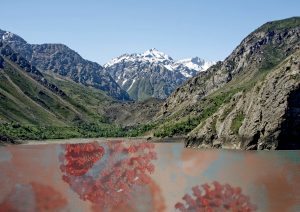 The global COVID-19 pandemic has exacerbated Central Asia’s pre-existing patterns of censorship and repression. The governments of the region have used this public health crisis as a pretext to consolidate their hold on power, stifle criticism, and increase pressure on those speaking truth to power. International Partnership for Human Rights (IPHR) and its regional partners monitoring and researching the human rights policies of Central Asia’s governments have identified a few key trends.

The Central Asian countries are characterized by different degrees of authoritarian rule. The region’s authorities systematically violate their citizens’ fundamental rights and freedoms. From the beginning, Central Asia’s governments have adopted different approaches to the COVID-19 pandemic: Kazakhstan and Kyrgyzstan quickly introduced emergency regimes, while Uzbekistan enforced a strict lockdown without declaring a state of emergency. By contrast, the governments of Tajikistan and Turkmenistan adopted a policy of denial, claiming that the pandemic had not reached their countries, despite independent reports suggesting the contrary. Tajikistan’s government later acknowledged COVID-19’s spread, but Turkmenistan’s government has continued to deny and cover up the country’s evident outbreak, using ludicrous explanations to justify the adoption of COVID-19 preventive measures.

Despite the Central Asian governments’ varied initial approaches to the pandemic and the different policy measures they implemented in response to it, the pandemic’s broader effect has been similar across the region. The pandemic has demonstrated the limitations of these governments’ ability to handle a widespread medical crisis; their authoritarian, top-down strategies have exposed underlying shortcomings in the national healthcare systems that were caused by decades of mismanagement and underfunding. The pandemic has also taken a heavy toll on the region’s population by aggravating preexisting socio-economic problems. As a result, public resentment has been reinforced and public officials’ credibility has been undermined among common citizens. Concurrently, the region’s authorities have reinforced their grip on power and reined in criticism by targeting independent media, opposition members, civil society, social media users, medical professionals, and others who challenge their COVID-19 response and their policies more generally.

Censorship by Any Other Name

Government statistics on the number of infections and other aspects of the official COVID-19 narratives have prompted questions across Central Asia. In response, the authorities have declared war on “disinformation” by cracking down on information challenging their official narratives.

As part of their initial policy of denial, the Tajikistan and Turkmenistan authorities pressured doctors to participate in covering up COVID-19 cases and targeted independent outlets for casting doubt on the state media’s claims that the countries were COVID-19 free. In an attempt to prove that Turkmenistan was free from the virus, the authorities have supressed any non-state sanctioned communication on this topic, including by detaining and threatening people speaking about pandemic related issues in public places and by banning medical staff from using their cell phones at work. Other Central Asian countries have restricted independent journalists and civil society representatives from accessing information related to the pandemic; journalists have been denied accreditation, excluded from press briefings, and ignored when making inquiries to relevant state bodies.

The authorities of Kyrgyzstan, Tajikistan, and Uzbekistan have adopted new, vaguely worded legislation that levies heavy fines and other penalties for spreading “false information” about pandemic related issues. This legislation has armed those in power with a new, convenient tool to curb free speech. The authorities of Kazakhstan have exploited a pre-existing, overbroad criminal code provision banning the dissemination of “false information” to curtail criticism of the government’s COVID-19 response. Across the region, these measures have resulted in censorship and decreasing discussion. This development has been particularly evident on social media, which have become increasingly important platforms for interaction during the pandemic due to lockdown measures and the lack of alternative space.

Central Asian authorities have also used the pandemic to further escalate pressure on government critics, stifling dissent under the guise of preventing disinformation, protecting public health, and ensuring national stability. Journalists, bloggers, civil society activists, human rights defenders, protest participants, and opposition supporters have been subjected to intimidation and harassment for challenging the governments’ handling of the pandemic, as well as other aspects of current government policies. Critics have been threatened, summoned, questioned, detained, prosecuted, and convicted on charges initiated in retaliation for their peaceful and legitimate exercise of the freedoms of expression, association, and assembly.

The Kazakhstani authorities have targeted numerous bloggers, pro-democracy activists, and protest participants critical of the government and have charged them with violations of emergency rules. These critics also face charges based in overly broad criminal offenses such as “inciting hostility” and “extremism,” in addition to the ever-present “disseminating false information.” In Kyrgyzstan, national security services have summoned social media users questioning the government’s COVID-19 response and forced them to “publicly apologize” by threatening criminal prosecution. Ailing, elderly human rights defender Azimjan Askarov died in a Kyrgyzstan prison after authorities refused to release him or provide him access to life-saving medical assistance when his COVID-19-like symptoms fatally deteriorated. The authorities of Turkmenistan harassed and intimidated activists involved in a protest movement emerging among diaspora communities abroad, along with individuals inside the country who have dared to openly criticize the authorities or communicate with foreign-based activists. In Tajikistan, journalists have been subjected to anonymous online attacks and insults after posting COVID-19 related material. The authorities of Uzbekistan have used well-known tactics of surveillance, defamation campaigns, and criminal investigations against journalists and activists in recent months.

As in other regions of the world, civil society in Central Asia has played an important role in responding to the pandemic, monitoring and documenting the governments’ actions, informing citizens, and providing critical assistance to those affected by this public health crisis. For example, in Kyrgyzstan, volunteer groups mobilized to help poor families and other socially vulnerable groups during the COVID-19 lockdown and provided life-saving medical assistance to thousands of people when the national health care system could not manage the surge in cases.

At the same time, in the shadow of the pandemic, the Central Asian authorities have taken new measures restricting the region’s already narrow space for civil society. Kazakhstan rushed through a new law restricting assemblies, despite serious objections by national, international, and civil society experts, who claim that it falls short of international standards in key respects. It has enabled Kazakhstani officials to continue their repressive pattern of detaining and penalizing participants in peaceful protests held without advance permission. Tax bodies in Kazakhstan recently targeted over a dozen human rights NGOs, threatening them with exorbitant fines and suspension because of alleged violations when filing declaration forms required for foreign grants. Authorities are obstructing the work of these NGOs at a time when their role is particularly essential.

Kyrgyzstan’s parliament moved ahead with a widely criticized draft law on NGOs without widespread consultation with civil society organizations. This draft law, which remains under consideration, increases NGOs’ already heavy reporting burden. Civil society organizations fear that it will be used as a tool of intimidation against organizations the government views as “inconvenient.” Kyrgyzstani police selectively enforced a ban on assemblies introduced as part of the emergency measures; they allowed some peaceful protests, while dispersing others. Reports of widespread irregularities during the October 4, 2020, parliamentary elections sparked widespread protests that broke out in violent clashes between law enforcement authorities and protesters. The protests plunged Kyrgyzstan into a political crisis, which saw the resignation of both the president and the government and the rise of Sadyr Japarov—a former MP whom protesters freed from prison. Japarov and his supporters claim to be acting in the peoples’ interests, but their motives remain in question. They have intimidated lawmakers, journalists, and protesters, and pushed for the adoption of a controversial new constitution that would significantly expand the president’s powers, while eroding checks and balances and providing the authorities with new censorship tools. Due to widespread criticism, the authorities abandoned their plans to put up this draft constitution for a vote through a referendum on January 10, 2021; instead, citizens were asked to choose between a parliamentary and presidential system of governance, in addition to casting their votes in new presidential elections. Amid concerns about the lack of a level playing field and the misuse of public resources, Sadyr Japarov won the presidential elections by a landslide, and an overwhelming majority of the referendum participants supported the transition to a presidential system. Currently the work on a new constitution establishing such a system continues.

Meanwhile, in Tajikistan and Uzbekistan, the governments’ drafting of new laws restricting non-commercial organisations have allowed few opportunities for civil society to offer input. This lack of transparency has reinforced concerns that these new laws will excessively restrict freedom of association. The current operating environment for NGOs in both countries is difficult: Tajikistani authorities regularly carry out intrusive inspections of NGOs, which result in fines and forced closures for technical errors. In Uzbekistan, authorities continue to use various pretexts to withhold compulsory state registration to independent human rights NGOs, and impose wide-ranging restrictions on the funding and operation of even registered groups. An August 2020, Uzbekistani draft law on assemblies cements the government oversight and approval of protests and gives local authorities wide discretion to restrict them.

In Turkmenistan, one of the world’s most repressive countries, independent human rights NGOs are not able to operate openly inside the country because of its extremely repressive climate. Anyone associated with Turkmenistani exile-based groups are at particularly high risk of persecution. Some of these groups have recently reported increasing interference with their website operations in apparent retaliation for their criticism of the government and its reckless COVID-19 policies. Turkmenistan’s authorities have used both intimidation and persuasion to quell spontaneous protests against the lack of basic food staples at affordable prices and other socio-economic problems exacerbated by the pandemic.

Looking to the Future

The pandemic has highlighted Central Asia’s longstanding structural and governance problems. Government authorities in the region have responded to criticisms with control and repression. Rather than welcoming public discussion and civic engagement during this public health crisis, the authorities have silenced critical voices and justified this repression by arguing that steering out of the crisis requires it. Civil society, however, has not given in to these attempts but has risen to the occasion by stepping in when the authorities have failed to provide for the needs of citizens and by demonstrating resilience in the face of threats and harassment. As the pandemic lingers, the region’s civil society actors struggle to assist vulnerable communities and to hold authorities accountable to their obligation to protect the rights and wellbeing of citizens. Now more than ever, they need the international community and international civil society’s support in this daunting task.

This article was written by Ann-Sofie Nyman, who works on research and publications at International Partnership for Human Rights (IPHR). The article is forthcoming in Dissident Magazine. IPHR is not associated with Dissident Magazine and might not share the views of its publishers or contributors.