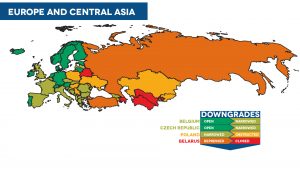 The CIVICUS Monitor has released its annual, global report People Power Under Attack 2021, which examines civic space trends across the world in the past year. The report is based on the findings of updates from independent CIVICUS Monitor research partners, including updates on Central Asia prepared by International Partnership for Human Rights (IPHR) and its partners from the region.

The report draws attention to the worsening civic space in Central Asia. Government opponents, civil society activists, independent journalists, bloggers, human rights defenders, lawyers, peaceful protesters, and others critical of governments have been persecuted across the region through tactics ranging from orchestrated online attacks, anonymous threats, and surveillance to arrest, prosecution, and imprisonment on politically motivated charges. Governments have frequently limited the online dissemination and exchange of information, including through the arbitrary blocking of websites critical of the government. Turkmenistan’s government, which continues to deny the existence of COVID-19 in the country, has stepped up its campaign against tools that circumvent internet restrictions, such as virtual private networks (VPNs), which people use to access otherwise inaccessible resources. New legislation initiated in several Central Asian countries, including Kazakhstan and Kyrgyzstan, imposes further restrictions aimed at censoring critical online content.

The report also highlights violations of the freedom of peaceful assembly in Central Asia, noting that peaceful protests rarely occur in many countries of the region given the repressive climate and the ever-present risk of retaliation against those who speak out against government policies. In Kazakhstan, the authorities have continued to systematically prevent peaceful opposition protests from taking place, detaining and harassing participants. For example, in February 2021, about 30 activists from the unregistered Democratic Party were rounded up by the police and kettled for over 10 hours after they attempted to protest in Almaty for political reforms. The police used force to carry out 60 pre-emptive detentions, including of bystanders.

The report, further, documents the use of tactics of intimidation and harassment by Central Asian governments in attempts to silence critics. In Kyrgyzstan, under President Sadyr Japarov, who rose to power following a political crisis in October 2020, government critics have faced online and offline attacks, threats, and detention for raising concerns about the new constitution, which undermines the separation of powers, concentrates presidential power, and threatens civic freedoms. In neighbouring Tajikistan, the government continues to intimidate and harass independent journalists and lawyers, including those who now are in exile. Similarly, Turkmenistan’s government has targeted critical voices, both inside and outside the country, as part of a widening crackdown on dissent due to growing criticism of its policies. Kazakhstan’s government has further stepped up its use of overly broad criminal charges against opponents, particularly against alleged supporters of peaceful opposition movements which have been banned. Ahead of Uzbekistan’s October 2021 presidential elections, opposition members, bloggers, and activists faced renewed pressure, with opposition parties and independent CSOs being denied registration, despite the subsequently re-elected president’s pledges to promote democratic reforms and improve civic space.

Finally, the CIVICUS Monitor report highlights the worrying trend of passing new laws restricting civic freedoms in the region. For example, in Kyrgyzstan, two such laws were fast-tracked through Parliament in 2021: a law against ‘false information’ which critics describe as a censorship tool to protect government officials from criticism and a law introducing a new financial reporting scheme for CSOs which threatens to tighten state control of CSOs.

The chapter on Europe and Central Asia in People Power Under Attack 2021 is available here.

For more information on civic space developments in Central Asia, see the full list of updates compiled by IPHR and its partners for the CIVICUS Monitor in the past year here.

The CIVICUS Monitor is a unique global initiative which tracks, analyses, and rates civic space in 196 countries across the world based on independent civil society information. Civic space is currently rated as “closed” in Turkmenistan and Uzbekistan, “repressed” in Tajikistan, and “obstructed” in Kazakhstan and Kyrgyzstan.