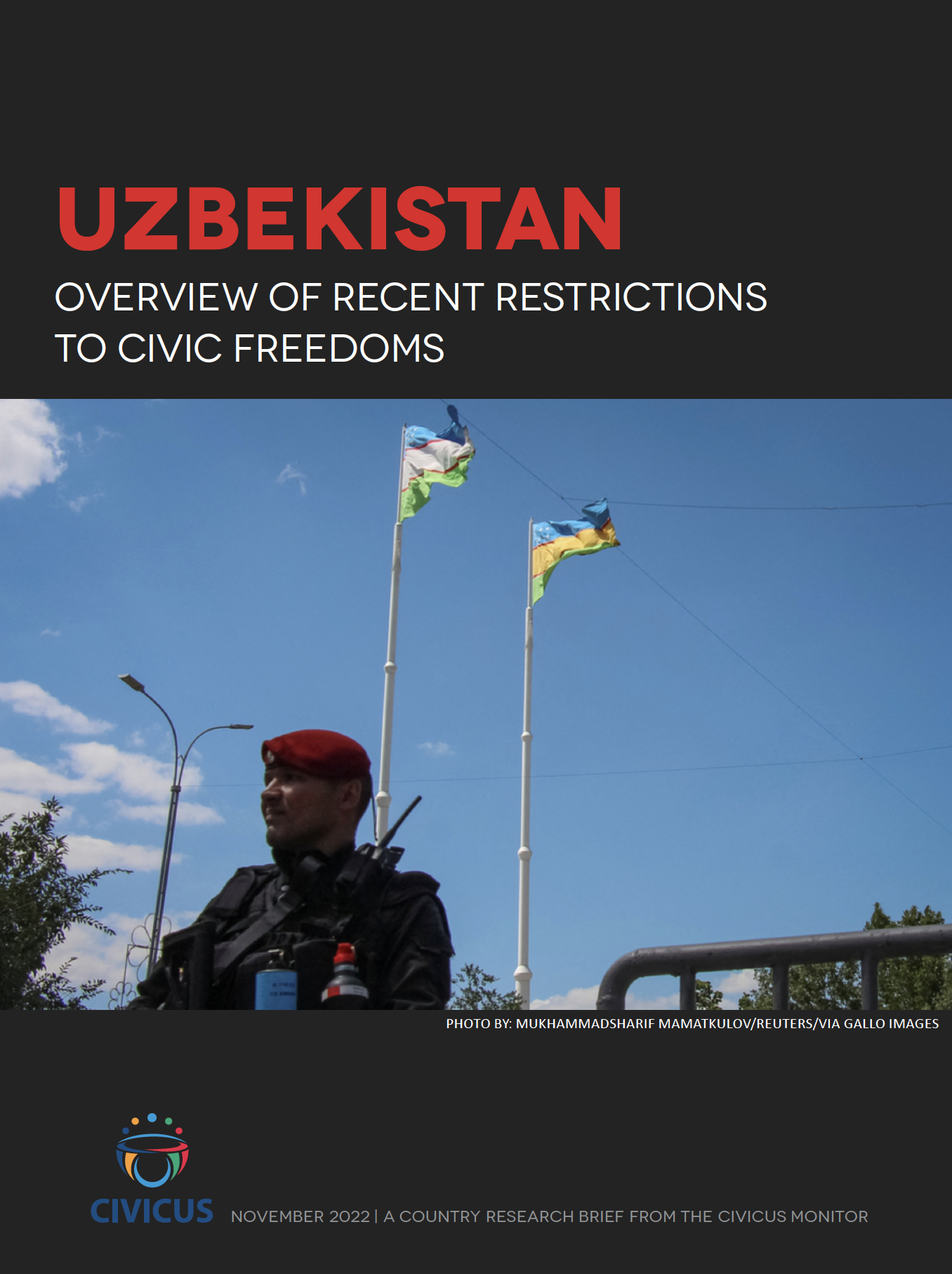 CIVICUS has produced a new research brief on the state of civic freedoms in Uzbekistan. Despite much-publicised steps by President Shavkat Mirziyoyev to improve Uzbekistan’s image in the eyes of the international community, civic freedoms in the country remain severely restricted.

Mass protests rarely take place in Uzbekistan, reflecting the restrictive environment for the exercise of freedoms of peaceful assembly and expression.

However, the presidential announcement of proposed constitutional amendments that affected the autonomous status of Karakalpakstan led to mass protests in the republic on 20 June 2022 and on 1 and 2 July 2022, when thousands of people gathered in Karakalpakstan’s capital Nukus and other cities to peacefully express their discontent with the proposed amendments. On the evening of 1 July 2022, the authorities reportedly dispersed protesters with rubber bullets, stun grenades, smoke bombs and water cannon. There were also unconfirmed reports that some people were killed by law enforcement officers during the dispersal.

Individuals have faced retaliation for blogging on corruption and other issues considered sensitive by the authorities. In accordance with amendments to the Law on Informatisation adopted in March 2021, the owners of online resources, including bloggers, are required to ensure that their resources are not used for the dissemination of ‘knowingly false’ information, ‘defamatory’ information, or other information defined as impermissible through vaguely worded language. The failure to promptly remove such information, if detected, might result in restrictions in accessing the online resources in question.

Although the government publicly claims that there are over 10,000 CSOs now operating in Uzbekistan, closer examination reveals that the majority of these organisations are in fact government-organised non-governmental organisations (GONGOs). The Uzbekistan Independent Institute for Formation of Civil Society reported that 66 per cent of groups are GONGOs, with almost half of them established by government decree. In comparison, the process of registering genuine new CSOs remains fraught with difficulties, particularly when they focus on human rights. Although human rights defender Nikolay Kungurov successfully registered his organisation in September 2022, several independent CSOs have repeatedly been denied registration on grounds that appear to be politically motivated.

Uzbekistan is currently rated Closed by the CIVICUS Monitor. There are a total of 25 countries in the world with this rating (see all). This rating is typically given to countries where there is complete closure – in law and in practice – of civic space. An atmosphere of fear and violence prevails, where state and powerful non-state actors are routinely allowed to imprison, seriously injure and kill people with impunity for attempting to exercise their rights to associate, peacefully assemble and express themselves. Any criticism of the ruling authorities is severely punished and there is virtually no media freedom. The internet is heavily censored, many websites are blocked and online criticism of power holders is subject to severe penalties (see the full description of ratings).