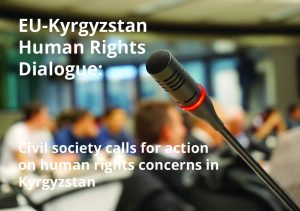 Today the 9th round of the EU-Kyrgyzstan human rights dialogue is taking place in Bishkek, Kyrgyzstan. International Partnership for Human Rights (IPHR), Legal Prosperity Foundation (LPF), and Kyrgyzstan’s Coalition against Torture urge the EU to raise the issues of reprisals and restrictions on freedom of expression and media in Kyrgyzstan. Despite some positive steps in the first half of 2018, including the dropping of libel lawsuits against journalists by both former President Almazbek Atambayev and current President Soornobey Jeenbekov,  current legislation needs amending to ensure that such cases will not be repeated in the future. Legislation on “incitement to hatred” also remains vaguely defined and has been arbitrarily applied by the authorities in recent years to curtail freedom of expression and speech.

“We welcome the fact that recently several defamation lawsuits against journalists have been dropped. However systemic changes are necessary in Kyrgyzstan in relation to freedom of expression and media in order to ensure that all citizens can fully exercise their rights”, said Brigitte Dufour, director of IPHR. “We call on the EU to insist that the media in Kyrgyzstan can operate without undue governmental interference”.

A briefing paper prepared by IPHR, LPF and the Kyrgyzstan Coalition against Torture highlights the situation regarding freedom of expression, in light of several law-suits for alleged defamation initiated by high ranking officials against media representatives, where courts imposed unrealistically high financial fines on both media outlets and individual journalists. The briefing paper also provides an overview of the situation of freedom of assembly and highlights the arbitrary restrictions imposed on peaceful rallies in the run-up to the presidential elections in October 2017, as well as ongoing concerns regarding torture and ill-treatment in Kyrgyzstan, including the country’s failure to fully implement UN Treaty body decisions and recommendations.

In June 2017, a criminal case was opened against journalist Ulugbek Babakulov on charges of “inciting inter-ethnic hatred”, following the publication of an article by him describing nationalist rhetoric against Uzbek minorities on social media.  The article was published by Fergana News in May 2017 and the news outlet was blocked by court order a month later. Babakulov himself has been subjected to a smear campaign and was forced to leave the country, after threats of criminal prosecution. Intimidation against the journalist continues abroad, and his family has been subject to surveillance and threats in Kyrgyzstan.

Television stations have also been subjected to government restrictions. These include the TV stations NTS  and  “September”, which is affiliated with Ata-Meken party leader Omurbek Tekebayev, former ally turned foe to former president Atambayev, who was imprisoned in August 2017.

September TV was ordered to close down in August 2017 on the grounds that it had allegedly disseminated “extremist” materials. The charges against the TV station centred around an interview with a former regional police chief, who accused President Jeenbekov and his brother of misappropriating government funds allocated in connection with the June 2010 events in southern Kyrgyzstan. The court ruling was widely criticised by journalists as well as the Ombudsman, who pointed out that  national legislation provides that specific content or programmes should be removed in such cases, rather than the entire TV station shut down.  In December 2017, the property of NTS, Kyrgyzstan’s largest private TV station, was seized by court order. The TV station NTS is associated with opposition politician Omurbek Babanov, who is also facing criminal charges of “inciting ethnic hatred” and “plotting riots” and “seizure of power”. Babanov left the country after the October 2017 elections.

The authorities pursue efforts to impose restrictions on NGOs. In the run-up to the presidential elections restrictions were imposed on local NGOs involved in election monitoring. Legislative changes limit the number of NGO monitors during elections and restrict their rights to move around freely at polling stations, and also deprive NGO monitors of the right to appeal against decisions of election commissions. In view of the upcoming parliamentary elections in 2020, it is of utmost importance that amendments are made to legislation to guarantee that civil society will be able to monitor the elections.

“Human rights defender Azimjan Askarov remains behind bars despite the April 2016 UN Human Rights Committee’s conclusions that he was arbitrarily detained and ill-treated, and their call for his immediate release”, said Nadira Eshmatova, Director of the Legal Prosperity Foundation, in Kyrgyzstan. “In additional in 2016, Kyrgyzstan introduced constitutional amendments releasing the state from the obligation to implement the judgments of international bodies and courts. This remains problematic in view of Kyrgyzstan’s obligation to implement UN Human Rights Committee conclusions”.

“Torture and ill-treatment continue to be widely used in Kyrgyzstan. A comprehensive survey by Kyrgyzstan’s Coalition against Torture in 2017 covering 28 detention facilities across the country concluded that out of the 600 respondents, one third reported having been subjected to torture or ill-treatment” said Sardor Abduhallilov, an attorney at-law at “Spravediivost” (Justice) Human Rights Organisation in Jalal-Abad, Kyrgyzstan.  He continued “Impunity for perpetrators is prevalent, and comprehensive, effective, and impartial investigatory mechanisms are still absent in the country.”

For more information about current challenges to freedom of expression, media and assembly, as well as torture and ill-treatment, see the briefing paper prepared by IPHR and LPF, and Kyrgyzstan’s Coalition against Torture for the EU-Kyrgyzstan Human Rights Dialogue.