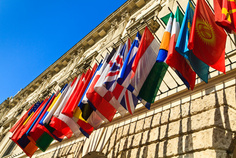 The annual OSCE Human Dimension Implementation Meeting, the largest annual human rights conference in Europe, will take place in Warsaw on 23 September-3 October 2014. International Partnership for Human Rights (IPHR) is participating in this conference together with partner organizations. IPHR and partners have also prepared a number of statements for the conference, highlighting human rights trends in countries of the former Soviet Union. Several of them are issued in the framework of the Civic Solidarity Platform (CSP), a network of human rights NGOs in Europe, North America and the former Soviet Union. The statements include the following ones (for more details, please follow the links):

Current threats facing human rights NGOs and defenders in Central Asia (Working sessions 2 and 3, Tuesday 23 September: Fundamental freedoms 1): Across Central Asia, non-governmental organizations and individuals who are engaged in human rights promotion and protection activities work in precarious and insecure conditions. While the climate for civic engagement remains fundamentally repressive in Turkmenistan and Uzbekistan, recent developments in Kazakhstan, Kyrgyzstan and Tajikistan have signalled a deterioration of the situation in these countries. This trend is related to broader developments in the former Soviet Union, including recent events in Ukraine that have made leaders in the region increasingly fearful of challenges to their power. The situation is also affected by the negative example set by other post-Soviet governments in their current crackdowns on civil society. (…) Read more. (For a Russian version, go here).

Stop muzzling human rights groups & advocates in Russia and Azerbaijan! (Working sessions 2 and 3, Tuesday 23 September: Fundamental freedoms 1): We, members of the Civic Solidarity Platform, condemn the current, unprecedented crackdowns on independent human rights NGOs and their members now witnessed in Russia and Azerbaijan. These developments are chilling in their implications for freedom of association, freedom of expression and human rights defence in the two countries and set a dangerous precedent for other non-democratic and illiberal governments in the OSCE region.  As already seen, rhetoric branding human rights groups and advocates as “foreign agents,” “spies” and “traitors” has increasingly been used also in other countries (including the EU member country Hungary) and draconian legislation impeding the operation and funding of NGOs enforced by the Russian and Azerbaijani governments are studied and used as inspiration elsewhere. (…) Read more.

Trends regarding torture and ill-treatment in Kazakhstan, Kyrgyzstan and Tajikistan (Working Session 4, Wednesday 24 September 2014: Rule of law 1): In the last few years the authorities of Kazakhstan, Kyrgyzstan and Tajikistan have taken some noteworthy positive steps to combat torture. However, despite some steps in the right direction, all three countries have failed to fully adhere to the OSCE Human Dimension Commitments relating to the eradication of torture that they undertook to uphold as OSCE participating States. They have also failed to fully implement crucial recommendations issued in this area by UN human rights bodies such as the UN Committee against Torture, the UN Human Rights Committee, under the Universal Periodic Review, as well as by the UN Special Rapporteur on torture. Torture continues to be widely used across Kazakhstan, Kyrgyzstan and Tajikistan and existing legal safeguards are routinely not implemented. (…) Read more.

Unfair trials used to clamp down on dissent in countries of the former Soviet space (Working Session 5, Wednesday 24 September 2014: Rule of law 2): In this statement we want to draw your attention to the issue of unfair trials in countries of the former Soviet Union. In recent years in many former Soviet countries those expressing opinions critical of the authorities have been subjected to arbitrary detention and imprisonment after unfair trials. In many cases justice has been applied selectively, targeting those that hold political opposition views, those who are critical of government policies or who are perceived to pose a challenge to the state. In many cases charges have been fabricated solely to punish people for peacefully exercising their rights to freedom of expression, assembly, association, religion or belief, including human rights defenders, dissidents, opposition politicians, lawyers, independent journalists and bloggers, and religious activists. (…) Read more.

Worrying trends regarding religious freedoms in the OSCE region (Working session 14, Wednesday 1 October 2014: Fundamental freedoms 2): At this time, we are witnessing an increase in efforts to stifle opposition and dissent in parts of the OSCE region where there is a widespread fear of political change. As part of this trend, religious freedoms are also being trampled upon by governments that exploit arguments about ensuring national security and stability to defend policies that impose excessive restrictions on religious activities, undermine religious pluralism, and result in violations in particular of the rights of members of so-called non-traditional religious communities.  We would like to use this opportunity to raise a number of major concerns in this area that are common to many OSCE participating States, as well as to briefly describe a few examples that illustrate broader trends. (…) Read more.

A Downward Spiral: Freedom of Religion and Belief in Crimea (Working session 14, Wednesday 1 October 2014: Fundamental freedoms 2): The ability to enjoy the fundamental freedom of religion and belief has progressively deteriorated on the Crimean Peninsula since the territory’s occupation and annexation by the Russian Federation. Targeted groups are suffering violations of their right to peacefully practice their religion and are increasingly subjected to the provisions of the “anti-extremism law”, which has long been criticized by human rights groups. In addition to overt physical aggression towards religious institutions and community leaders, authorities in Crimea are actively creating administrative and legal obstacles to peaceful observances. (…) Read more.