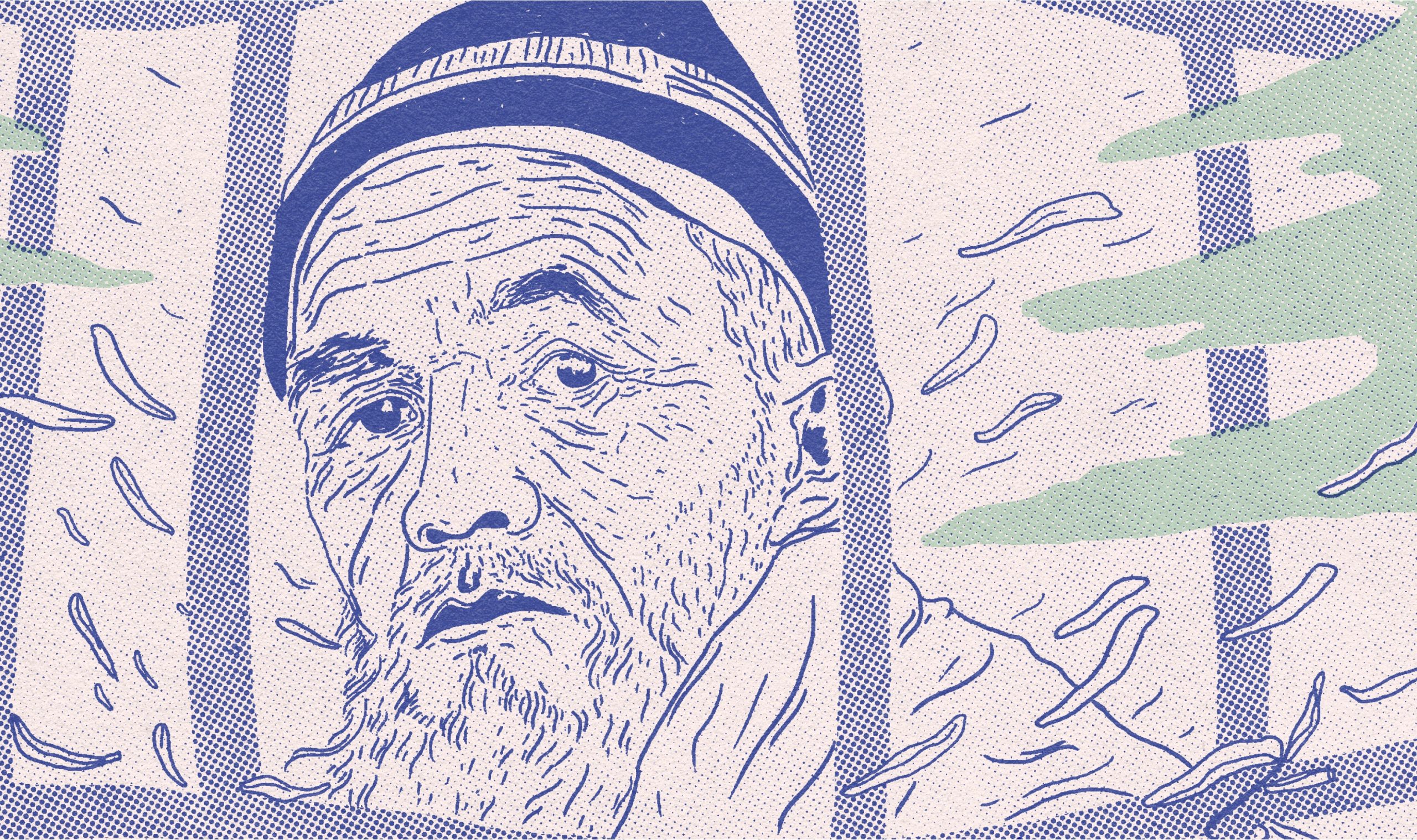 This article is also available at Kloop.kg

Today marks the 10th anniversary of the arrest of Azimjon Askarov, then leader of the independent human rights organization Vozdukh (Air). In 2010, the trained artist  and father of three grown up children lived in the small town of Bazar-Korgon in the southern Jalal-Abad region of Kyrgyzstan with his wife Khadija and his late mother.

Askarov, an ethnic Uzbek, had monitored and documented cases of police abuse and prison conditions in his home community for over a decade. During the interethnic clashes between Kyrgyz and Uzbeks in southern Kyrgyzstan in June 2010, which left some 470 dead, he recorded the violence and looting in Bazar-Korgon. His human rights work, reavealing torture and exposing corruption,  was not to the taste of the authorities.

As ethnic tensions were building up in the south of Kyrgyzstan, ethnic Uzbek residents of Bazar-Korgon gathered on 13 June at a bridge just outside the town, in order to prepare for an attack they believed was imminent. Several police officers arrived, allegedly to convince the crowd to disperse. Violence ensued and police officer Myktybek Sulaimanov, an ethnic Kyrgyz, was killed.

Two days later, on 15 June 2010 police officers detained Askarov outside his office building and took him to the local police station. He and another seven co-defendants were subsequently charged with complicity in murder, participating in mass disturbances and inciting ethnic hatred. Askarov was held without contact with the outside world for several days. When his lawyer Nurbek Toktokunov was able to visit him on 22 June he took photos of bruises on Askarov’s side and lower back.

The investigation into the case was seriously flawed. At all times, Azimjon Askarov and 14 defence witnesses maintained that he was at home when the officer was killed. Askarov reported that he had only left his house later that day to see the extent of the violence in his town. The prosecution primarily relied on the testimonies of police officers who were not able to provide any detailed or clear account of the events in question. Furthermore, no investigation has ever been carried out into Askarov’s and his co-defendants’ reports that they were tortured in police detention.

In September 2010 a court in the southern Nooken district found Askarov guilty of all charges brought against him and sentenced him to life imprisonment. His co-defendants were handed down prison terms ranging from four years to life.

A victim of miscarriage of justice

Sardar Bagishbekov, who heads the Foundation Voice of Freedom in Bishkek, attended the trial and appeal hearings and recalls: “All the reports that have since been published about the procedural violations in Askarov’s case cannot even begin to convey the absurdity of the trial. I saw the collapse of the judicial system, its lack of principle, its bias and dependence on the executive branch of power.“

Local and international human rights defenders believe that he was targeted in retaliation for his human rights work and because of his Uzbek ethnicity. Amnesty International declared him to be a prisoner of conscience. Askarov, a pious Muslim, has always maintained his innocence and has repeatedly sworn on the Koran to confirm it.

Tolekan Ismailova, the director of the Kyrgyzstani human rights movement “Bir Duino-Kyrgyzstan“ and a long-term supporter of Askarov, explains: “He paid the price for his long fight as a human rights defender – he saved people from torture, discrimination and humiliation for many years. During the interethnic conflict, the police, investigators and prosecutors took their revenge.“

Although most victims of the June 2010 events were Uzbeks, this ethnic group was disproportionately targeted for prosecutions in comparison with ethnic Kyrgyz.

Human rights defenders who have analysed the court verdicts handed down following the interethnic conflict in 2010 state that of the 96 people  charged with and convicted of “murder“, only ten are Kyrgyz, one is  Uyghur and 85  are Uzbeks.

Dozens of people were convicted in trials that did not conform with international fair trial standards for their alleged involvement in the conflict. Azimjon Askarov is the most prominent victim of this miscarriage of justice, but many others also remain behind bars.

With the assistance of lawyer Nurbek Toktakunov and the Open Society Justice Initiative, Askarov submitted a complaint to the United Nations (UN) Human Rights Committee. In March 2016 the Committee concluded that Askarov had been arbitrarily detained, tortured and denied fair trial rights. It called on the Kyrgyzstani authorities to release him immediately and quash the conviction.

Following the decision, the Kyrgyzstani Supreme Court ordered a retrial. But its consideration was based on the results of the same flawed investigation as before. After exhausting all possibilities for appeal Askarov’s conviction was upheld on all counts, as was his life sentence.

Askarov and his lawyers have continued to fight for justice, but to no avail. In 2019 a new trial was conducted as Askarov requested that his sentence be reviewed based on the new Criminal Code that entered into force in  January 2019. But the Supreme Court again upheld the verdict after reviewing the sentence.

Another recent attempt to obtain justice failed when, on 12 June 2020, Bishkek Administrative Court refused to consider a case filed by Askarov against the Kyrgyzstani government for its failure to implement the 2016 UN Human Rights Committee decision. The court stated that the issue in question was outside its remit despite having previously accepted to review the case and having held a first hearing on 1 June 2020.

“Azimjon Askarov is a victim of miscarriage of justice at the hands of courts that have shown their inability to remain independent from political and public pressure. With the latest court decisions, Kyrgyzstan continues to blatantly ignore the UN Human Rights Committee call for his immediate release. If the authorities continue to refuse to abide by their international obligations, they must at least show their humanity by releasing the ailing human rights defender on humanitarian grounds. This is even more pressing  during the COVID-19 pandemic, which greatly affects the older generation“, says Brigitte Dufour, Director of Brussels-based International Partnership for Human Rights (IPHR).

“My voice has been heard more clearly than ever”

For the past ten years Azimjon Askarov has faced a difficult struggle, experiencing despair in the face of cruelty and injustice, but also finding hope and strength to carry on. In his memoir “I am happy…“, published in 2017, Askarov writes that he made two attempts at suicide and almost died during a hunger strike. But he says he has now found peace in religion and that his faith has helped him to detach himself from his daily reality and free his soul. His family, and continued local civil society support and international solidarity have also meant a lot to him. Over the years thousands of people from around the world have written to him expressing their support. And while in prison he continued his mission as a human rights defender.

In a letter IPHR received from Azimjon Askarov on 12 June 2020 he wrote: “Those who put me in prison did so to silence me. But since I have been locked away my voice has been heard even more clearly than ever as I draw attention to the injustice ethnic Uzbeks have suffered in Kyrgyzstan and the impunity that prevails after the June 2010 events.“

According to Askarov’s lawyer Valeryan Vahitov of “Bir Duino-Kyrgyzstan“, who has worked on the case for eight years, Askarov has dealt with his imprisonment in a very courageous way. “Every time I visit him, his courage and ability to withstand the burdens of loneliness and the deprivations of prison life make a deep and lasting impression on me. I see him as a true human rights defender who never  looses the will to fight for justice“, he says.

When Brigitte Dufour of IPHR visited Askarov in prison in November 2018, she was struck by his mental strength, intelligence, wit and humour. “During the visit, Askarov sat in a cold room behind iron bars, physically frail but with bright eyes. He spoke of his humiliation at having to receive our delegation in such poor conditions, saying that he would rather offer us tea and biscuits in his office, ‘in a civilized manner’. He shared his deep frustration at the injustice he was suffering, before apologizing for ‘moaning’. But to us his anger was perfectly legitimate and all I could do was to hold his hands through the bars and tell him how much we understood his feeling of injustice!”

Over the years Askarov’s case has had high-profile supporters. The UN High Commissioner for Human Rights has intervened on his behalf, as have UN treaty bodies and special rapporteurs. The European Union and other foreign governments have repeatedly called for his release, in accordance with the decision of the UN Human Rights Committee. Local and international human rights groups have issued numerous statements, briefings and press releases.

However, the Kyrgyzstani authorities have remained deaf to these calls, and have continued to firmly clasp the key to Askarov’s prison cell.

In 2017, the then President Almazbek Atambayev stated during a visit to Brussels that the authorities did not intend to release Askarov.

“I read the UN decision, it does not say to release Askarov, but to redress the rights that have been violated. […] There was no decision saying to release him, the decision said that he had been tortured in prison, that the investigation had not been independent and that the trial was not objective and carried out under pressure – therefore the court will review this case again”, Atambayev had announced a year earlier at a meeting with German Chancellor Angela Merkel in Bishkek.

The current president has not yet spoken out about the case of the human rights activist.

Lawyers and human rights activists believe that the sentences against Askarov illustrate the strong dependence of the judiciary on the executive branch of power. “The prominent assurances by the current and previous presidents to reform the judicial system and ensure its independence have proved to be empty words,“ according to the lawyer Valeryan Vahitov.

In the opinion of human rights defenders, Askarov’s case has become highly politicized. Public discussion and insulting social media comments about the imprisoned Uzbek human rights defender clearly illustrate that the ethnic tensions that erupted in June 2010 continue to simmer under the surface. And Askarov’s continued imprisonment perpetuates them.

“Kyrgyz nationalists react to his name like a bull to a red flag and would see his release as a sign of weakness,“ according to Valentina Gritsenko of the non-governmental organization Spravedlivost (Justice) in southern Kyrgyzstan.

According to the official version of events,  the ethnic Uzbeks were responsible for igniting the clashes in 2010, despite the fact that what actually happened back in June 2010 has never been impartially investigated. “The perpetrators of the clashes have not been brought before the courts. Justice has not yet been served,“ Tolekan Ismailova points out.

For many Uzbeks Askarov’s case has also become a symbol. He stands for numerous ethnic Uzbeks who also got caught up in the politicized reaction to the ethnic clashes and continue to serve prison terms handed down in unfair trials.

“The authorities have failed to effectively investigate the crimes Askarov has been convicted of because the results could challenge the official narrative,“ Sardorbek Abdukhalilov of Spravedlivost concludes.

In order for Kyrgyzstan to heal and put the pain of the ethnic clashes behind it, the authorities need to find the courage to put politics aside and focus on establishing what really happened in June 2010. So far local and international calls to carry out independent investigations have been blocked.

Local and international human rights defenders will continue to call for Azimjon Askarov’s release and a fair review of all of the cases of those imprisoned following unfair trials in connection with the interethnic conflict in 2010.