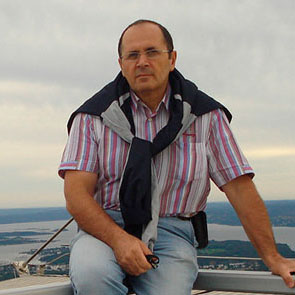 Human rights defender Oyub Titiev was released on parole today after serving 17 months of a four-year prison sentence on fabricated charges. Titiev and the human rights NGO for which he was working, Memorial, have long been a thorn in the side of the local authorities due to their key role in documenting grave human rights violations in Chechnya.

The World Organisation Against Torture (OMCT) and FIDH, in the framework of the Observatory for the Protection of Human Rights Defenders, together with International Partnership for Human Rights (IPHR), welcome the release on parole of Oyub Titiev,Head of the Human Rights Center (HRC) “Memorial” office in Chechnya, but once again call on the authorities to annul his conviction, provide him with full reparation and furnish guarantees that he and all other human rights defenders will be allowed to pursue their vital human rights work without any further impediment or harassment by local or federal officials.

“We are relieved Oyub isfinally free. However, for any first-time offender of a non-serious crime it’s common practice to obtain early release on parole. What was extraordinary, was the fabricated criminal case against Titiev and the deeply flawed trial before a court in Chechnya,”said Gerald Staberock, OMCT Secretary General.

On March 18, 2019, the Shali City Court sentenced Titiev to four years in prison for “possession of marijuana in large quantities” (Article 228(2) of the Russian Criminal Code). Titiev, who was detained since his arrest on January 9, 2018, recently applied for early release in accordance with Russian law and on June 10, 2019 the Shali City Court approved his application.

“Oyub should never have been detained in the first place. The authorities should restore his rights after 17 months of abusive court proceedings, arbitrary detention and smear campaigns,”said Dimitris Christopoulos, FIDH President.

Today the Observatory and IPHR publish an observation note on the trial and conviction of Oyub Titiev. The note shows how the trial was replete with violations of fair trial standards. Prior to the start of the trial, the leader of Chechnya, Ramzan Kadyrov, publicly claimed that Titiev is a drug user, thereby violating the presumption of innocence of the accused. During the eight-month long trial, the judge refused repeatedly defense motions to conduct an investigation into well-substantiated allegations that marijuana had been planted in Titiev’s car.

“The release of Ouyb is great news for his family, colleagues and entire human rights movement in and outside Russia. The case proves the importance of coordinated solidarity and support which can lead to successful outcomes even in authoritarian contexts”, said Brigitte Dufour, Director of IPHR.

You can read the trial observation note on OMCT, FIDH and IPHR websites.

The Observatory for the Protection of Human Rights Defenders (the Observatory) was created in 1997 by OMCT and FIDH. The objective of this programme is to intervene to prevent or remedy situations of repression against human rights defenders. OMCT and FIDH are both members of ProtectDefenders.eu, the European Union Human Rights Defenders Mechanism implemented by international civil society.

IPHR is an independent, non-governmental organization founded in 2008. Based in Brussels, IPHR works closely together with civil society groups from different countries to raise human rights concerns at the international level and promote respect for the rights of vulnerable communities.