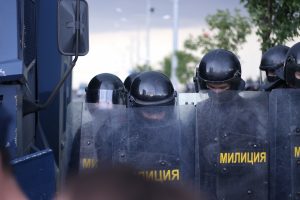 Early on 16 February 2021, the Belarusian authorities launched a new wave of repression against civil society organisations and independent media across the country.

Police officers raided the homes and offices of employees of the Viasna Human Rights Center, the Belarusian Association for Journalists, and dozens of other civil society activists. The raids were carried out in the cities of Minsk, Gomel, Mogilev, Vitebsk, Mozyr, Rechyts and Brest.

According to the Belarusian Investigative Committee, the raids were linked to criminal proceedings initiated under Article 342 of the Criminal Code (organisation and preparation of actions that grossly violate public order or active participation in them). The authorities allege that the investigation is aimed at “establishing the circumstances of the financing of protest activities”.

At least 25 human rights defenders have been targeted in this latest attack on freedom of expression which illustrates the authorities’ intent to silence critical voices in the country. The Belarusian authorities seek to prevent human right defenders and journalists involved in documenting human rights violations by security officials from carrying out their legitimate activities.

We call on the international community in particular to extend sanctions to Belarusian officials who have been implicated in the recent wave of crackdown.