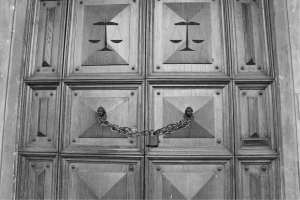 On 23 April 2018 the Azerbaijan Bar Association announced its decision to temporarily suspend the licenses of two prominent Azerbaijani lawyers – Asabali Mustafayev and Nemet Karimli. The lawyers were reprimanded after the first deputy Prosecutor General lodged a complaint about critical statements they made to the media concerning cases on which they were working.

Asabali Mustafayev was representing Gozel Bayramli, a political activist who was sentenced to three years’ imprisonment after being found guilty of smuggling 12,000 EUR in cash across the Georgia-Azerbaijan border. The Prosecutor’s office failed to note that Mustafayev had not yet been appointed as Bayramli’s defence lawyer when he made the statement about her arrest being politically motivated.

The second lawyer, Nemat Karimli, represented Afgan Mukhtarli – who was kidnapped in Georgia and brought across the border to Azerbaijan where he was found guilty of smuggling 10,000 EUR, illegally crossing the Georgia-Azerbaijan border and resisting police. Mukhtarli was subsequently sentenced to six years in prison.

In January 2018, the work of another lawyer, Fakhraddin Mehdiyev was halted based on a similar complaint. In November of last year, Yalchin Imanov, a lawyer who represented religious prisoners and who spoke out openly about his defendants being subjected to torture in prison, was dismissed from the Bar Association. These recent dismissals and suspensions confirm earlier concerns raised by IPHR about the lack of legislative transparency and independence of the Azerbaijan Bar Association.

Azerbaijani lawmakers approved amendments to the Code of Civil and Administrative Procedure and the Bar Act in Azerbaijan in November 2017. According to the bill, practicing lawyers who are not members of the Bar Association will be prohibited from appearing in court or representing clients in any kind of lawsuit. Only affiliated Bar members have the right to appear in court and represent clients. The bill significantly restricted the work of the handful of lawyers working on political and religious cases. Other members who have been disbarred from the Bar Association include Elchin Namazov, Farhad Mehdiyev, Aslan Ismayilov, Muzaffar Bakhishov and Alaif Hasanov and Yalchin Imanov. The Azerbaijan Bar Association currently consists of 1000 lawyers, most of whom refuse to take on politically sensitive cases.

The amendments directly contradict Azerbaijan’s international human rights obligations and international standards on the role of lawyers including the right to freedom of expression as guaranteed under international law. In a statement issued by the International Commission of Jurists (ICJ), the commission called on the Presidium of the Azerbaijan Bar Association to reverse the decision and allow the lawyers to resume their practice. The commission also emphasized that lawyers’ freedom of expression is an important safeguard for the protection of human rights.

IPHR calls on the government of Azerbaijan to guarantee that all lawyers are able to carry out their professional activities without hindrance and fear of reprisals. IPHR urges the government of Azerbaijan to fully respect and protect the human rights of lawyers and implement in law, policy and practice protections provided for by international law and standards, including those contained in the International Covenant on Civil and Political Rights, the European Convention on Human Rights and the UN Basic Principles on the Role of Lawyers.