Home 2022 International Anti-Torture Day: Kazakhstan must ensure justice for the victims of torture... 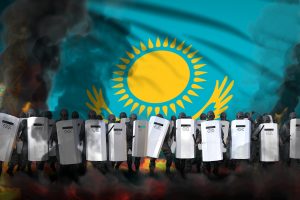 Five months after hundreds of people were subjected to torture and other forms of ill-treatment in connection with mass protests that swept through Kazakhstan in January 2022, victims and their families have not obtained justice. On the United Nations (UN) International Day in Support of Victims of Torture, the NGO Coalition against Torture in Kazakhstan (Coalition against Torture) and International Partnership for Human Rights (IPHR) call on the government of Kazakhstan to respond to victims’ calls for justice, ensure that their cases are effectively investigated, that the perpetrators are brought to justice in fair trials and that all those who suffered are awarded compensation.

In January 2022, thousands of people gathered across Kazakhstan demanding social and political change in predominantly peaceful protests. On 7 January 2022, President Kassym-Jomart Tokayev ordered  law enforcement officials and the army to “shoot to kill without warning”, declaring protestors to be “bandits” and “terrorists” and announcing an “anti-terrorist” operation. According to the Prosecutor General’s Office of Kazakhstan, as of 14 March 2022, 230 people had been killed in the January events in Kazakhstan, including 19 security officials, and thousands had been injured. The intense security operations also involved the detention of over 10 000 people, many of whom had not been involved in violent or unlawful acts and were solely exercising their right to peaceful protest. There were widespread and alarming allegations of the use of torture and ill-treatment against numerous detainees. According to official sources, eight people died in custody after being detained in connection with the January events.

On 6 January 2022, Daulet Mukhazhanov, a civil society activist, was attending a demonstration in the central square of Semey, a city in eastern Kazakhstan, when security forces opened fire against protesters. As protestors fled in panic, Mukhazhanov stopped in order to help a girl who had fallen to the ground, but was hit by a bullet in the spine. He subsequently underwent surgery but has remained paralysed and is now in a wheelchair. As he was undergoing treatment, police reportedly visited the hospital and attempted to detain him, but medical staff refused to hand him over. When Mukhazhanov was discharged on 17 January, he was immediately taken to a local police station for questioning and is now being treated as a witness in the ongoing investigation into the January events.

The failure to effectively investigate allegations of torture

During the January 2022 events, calls for restraint and for a prompt and effective investigation into allegations of the excessive use of force by security and other law enforcement officials were voiced by non-governmental and intergovernmental organizations. For example, several UN special rapporteurs and other UN experts called on the government of Kazakhstan to “halt their unrestrained use of force” and to “ensure that an independent and human-rights based investigation of State use of force against protesters is undertaken”. On 7 March, Michelle Bachelet, the UN High Commissioner for Human Rights, reiterated these calls at the 49th session of the UN Human Rights Council, calling for a thorough and independent  investigation into the January events.

On 3 March 2022, President Tokayev tasked the Prosecutor General’s Office with carrying out an in-depth investigation into the January events, stating that it is crucial to ensure the rule of law and to respect the rights of citizens during the investigation. The President underlined that torture and ill-treatment should be eradicated and that the Prosecutor General’s Office should submit proposals on harsher punishment for officials who resort to inhumane treatment of detainees.

At a parliamentary plenary session held on 14 March 2022, the Prosecutor General of Kazakhstan stated that the authorities had received 301 allegations of torture, ill-treatment and “unlawful investigation methods” in relation to the January 2022 events and that 243 criminal cases had been opened into such allegations.[1] To our knowledge, many victims have not filed complaints with the authorities, due to their fear of repercussions and lack of confidence in the criminal justice system, thus the number of alleged violations is believed to be significantly higher than the number of complaints officially registered. For example, activist Daulet Mukhazhanov told the Kazakh service of Radio Free Europe/Radio Liberty (RFE/RL) that he has not filed a complaint with the police about his injuries as he does not believe that it would result in the perpetrators being held to account.

To date only nine officials are known to have been detained in connection with allegations of torture or other forms of ill-treatment; eight of whom are National Security Committee officers and one a police officer. There have been no reports of pre-trial restraint measures being taken against other officials suspected or accused of torture.

According to human rights defenders, many victims of torture or ill-treatment did not have access to complaints mechanisms while they were held in detention centres and in many cases medical workers did not record their injuries. In those cases where victims were able to submit complaints, these were not always registered in the Unified Register of Pre-Trial Investigations.

In those cases when investigations were opened, they were reportedly often not carried out effectively and, in many cases no medical forensic examinations were conducted.

At the time of writing, the authorities have closed investigations into eight of the cases monitored by the Coalition against Torture stating that they had found no evidence that a crime had been committed. The Coalition will appeal against these decisions because the authorities did not explain how they had come to this conclusion or what investigative steps have been undertaken.

One such case is that of Aslan Dzhamaliyev from the city of Uralsk in western Kazakhstan. On the night of 4 to 5 January 2022, while on his way to a peaceful protest in the city centre, Aslan was detained by three police officers who pushed him into a police van, allegedly without giving him any explanation. In the van three other police officers reportedly beat, kicked and hit Aslan on the head, legs and body, including with a truncheon. Meanwhile they insulted him and told him “You are going to die”. Upon arrival at Uralsk City Police Department, other police officers took Aslan to an office on the second floor, which according to Aslan, was equipped with video surveillance cameras. There they reportedly forced him to sign what he said were unknown documents before letting him go home. They gave him back his mobile phone but had erased all the information it contained. On 5 January, Aslan registered his injuries with a doctor, who recorded bruises and hematomas on his head and the back of his neck. Aslan’s lawyer, who cooperates with the Coalition against Torture, reported the torture to the Regional Prosecutor’s Office, which forwarded the report to the local Anti-Corruption Service. The case was registered under Article 146, part 2 of the Criminal Code (“Torture”). However, three months later, on 6 April, Aslan received a text message from the prosecutor’s office, informing him that the criminal case had been dismissed “for lack of evidence of a crime”. Dzhamaliyev’s lawyer was not provided with a copy of the decision itself and was denied access to the case file on various pretexts.

The NGO Coalition against Torture and IPHR are concerned that the Kazakhstani authorities have failed to conduct thorough forensic medical and psychological/psychiatric examinations into allegations of torture and other forms of ill-treatment in connection with the January 2022 events. While forensic examinations have been conducted in many cases, those known to us have fallen far short of international standards. According to the Coalition against Torture, forensic medical examinations were ordered in 52 out of the 69 cases of torture and other ill-treatment that the Coalition has closely monitored and that have been registered in the authorities’  Unified Register of Pre-Trial Investigations.

Although Yerbol Turekulov went to the police voluntarily in order to hand in weapons that he had picked up during protests on 6 January 2022, he was detained and, together with a group of detainees, was reportedly subjected to abuse, beaten and forced to sit under the table at Koksui District Police Station in Almaty region. Police officers reportedly stripped the detainees naked and hit them on the genitals until they bled and also reportedly sexually abused some of them, filming this and threatening to distribute the video to the prison colony where they would serve their sentences, meaning that they would likely be subjected to further abuse there. Despite suffering injuries, the detainees were reportedly denied access to medical care. On 24 February, Turekulov filed a complaint with the authorities about being tortured and on 15 March a forensic medical examination was carried out. An MRI examination confirmed that Turekulov had sustained broken ribs. Subsequently, a forensic psycho-psychiatric examination was conducted, but very superficially. The examination took place at an anti-corruption service building and lasted no more than 15 to 20 minutes. A thorough examination that follows international standards requires several hours. In early June, the Coalition against Torture was able to organize an independent forensic examination, which established the presence of a post-traumatic syndrome and a causal link between physical bodily injuries and torture to which the victim was subjected.

The date of 26 June marks the entry into force of the UN Convention Against Torture and Other Cruel, Inhuman or Degrading Treatment or Punishment. Although Kazakhstan has been a party to the treaty since 1998 and as such has committed to take effective steps to prevent and counteract torture, this unlawful practice is still a persisting and widespread problem in the country.

According to official information, the Prosecutor General’s Office registers several hundred complaints of torture and other forms of ill-treatment every year.[2] Impunity for perpetrators continues to be the norm as only some two per cent of all cases reach court.

The current system to investigate allegations of torture and ill-treatment is ineffective and responsible for the low rate of successful prosecutions. In the large majority of cases, allegations are not investigated promptly and evidence of abuse is often no longer visible by the time the investigation begins. The authorities have not set up an independent investigatory mechanism which means that most investigations are not conducted impartially and effectively.

This statement can be viewed as a pdf here.

For further information about the January 2022 events and about torture and ill-treatment in Kazakhstan, please refer to:

Joint statement by IPHR and the Kazakhstani NGO Coalition against Torture, Kazakhstan: torture victims struggling to obtain justice after the January 2022 events, 30 March 2022,

Open letter by IPHR, Human rights NGO in Kazakhstan subjected to pressure over work on January 2022 events, 2 May 2022,

[1] As of 17 May 2022, the Coalition against Torture had registered 164 reports of torture and other ill-treatment in relation to the January 2022 events, affecting both men and women, as well as children in 13 of the cases. Sixty-nine of these cases were registered in the Unified Register of Pre-Trial Investigations (UPRI) under Article 146 of the Criminal Code (torture); three cases were registered under Article 362 (abuse of office), and four allegations were investigated without being registered in the UPRI.

[2] Refer, for example, to: https://www.gov.kz/memleket/entities/prokuror/press/events/details/622?lang=en