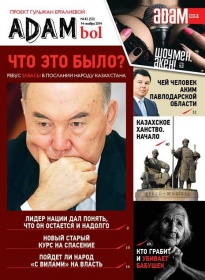 The Almaty City Court yesterday upheld the closure of the outspoken ADAM bol magazine over an article about the conflict in Ukraine. We condemn this decision as another serious blow to freedom of expression and media pluralism in Kazakhstan.

The ruling against ADAM bol was issued in response to a request from the Almaty city authorities to close down the weekly over an August 2014 article alleged to contain elements of “war propaganda.” This article featured an interview with a Kiev-based Kazakhstani opposition figure who called for supporting the Ukrainian army in its struggle against the separatist forces.

In its decision, the City Court upheld the ruling of an Almaty district court from 24 December 2014, which primarily drew on an expert analysis concluding that the article published by the weekly used “manipulative techniques” to communicate “approval of the war in Ukraine,” as well as “hidden encouragement” to Kazakhstanis to participate in this war. Alternative expert analyses presented by the defence were ignored by the court. Under vaguely worded provisions of Kazakhstan’s Media Law, media outlets may be closed down by court, among others, for propaganda of war or extremism.

The December decision was handed down late at night when the representatives of the weekly had left the court, and yesterday the court failed to pay due attention to information putting into question the procedure in which the lawsuit against the weekly had been filed.

Already in November 2014, the district court had – as a preventive measure – ordered that the publication of ADAM bol be suspended and its distribution halted.

ADAM bol, which is well-known for its frank coverage of corruption, human rights and other politically sensitive issues, is only the latest victim in a series of forced closures of independent media outlets in Kazakhstan in the last two years. Journalists and media who challenge the official line and expose those in power also continue to face threats, defamation cases, and other pressure, and websites that publish inconvenient information are regularly blocked. There are fears that the Kazakhstani authorities may further step up efforts to silence critical voices and stifle open debate ahead of the early presidential elections that have been announced for 26 April 2015.

The OSCE Representative of Media Freedom has previously criticized the measures against ADAM bol as “drastic and disproportionate” and said that they “contribute to an atmosphere of fear for members of the media.” Over 40 Kazakhstani civil society representatives and journalists, as well as a number of parliamentary deputies have spoken out in in support of the weekly.

ADAM bol and its chief editor Guljan Yergaliyeva have repeatedly faced harassment in the past.

In the evening before the court hearing on 24 December 2014, Yergaliyeva was attacked and hit in the head by an unknown perpetrator in the apartment building where she lives. She believes this attack was aimed at intimidating her. During the Kazakhstan visit of the UN Special Rapporteur on freedom of peaceful assembly and association in January 2015, Yergaliyeva and several other individuals were detained when on their way to a peaceful protest in support of ADAM bol.

In a separate court case from November 2014, the owners of ADAM bol were ordered to pay a sizeable amount of compensation (around 25 000 EUR) over an article about the conflict in Syria found to have defamed the representative of a mosque.

A number of online articles published about the court process against ADAM bol have been blocked for readers in Kazakhstan.

After yesterday’s court hearing, chief editor Guljan Yergaliyeva stated that ADAM bol has not yet decided whether to appeal this decision. She also announced plans to launch a new, alternative magazine.

We call on the government of Kazakhstan to comply with its international obligations on freedom of expression and the media and put an end to pressure on independent media and journalists, thereby also heeding the many recommendations on this issue it received during the recent UN Universal Period Review of the country. Media outlets should not be shut up for investigative and alternative reporting on issues of public interest.