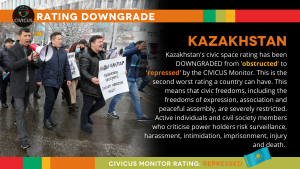 Kazakhstan has been downgraded from Obstructed to Repressed  by the CIVICUS Monitor. A repressed rating is the second worst a country can receive and indicates that fundamental civic freedoms, including the freedoms of expression, association and assembly, are severely restricted.

The CIVICUS Monitor is a research collaboration tool that rates and tracks respect for fundamental freedoms in 197 countries and territories; rating changes are conducted after a thorough assessment of the state of civic freedoms in the country and come after regular monitoring.

Kazakhstan has been downgraded to ‘repressed’ due to widespread violations of the  freedoms of peaceful assembly, association and expression  during the ‘Bloody January’ protests and in their aftermath.

“This downgrade comes on the heel of the rapid decline in civic space seen following the January events and is a culmination of a longer-term trend in which civic freedoms have deteriorated in Kazakhstan. It reinforces our concerns about the situation there,’’ said Aarti Narsee, Civic Space Research Officer at CIVICUS.

In January 2022,  peaceful protests over a sharp increase in fuel prices began in Kazakhstan’s Mangystau region and spread to other regions, with thousands of people voicing demands for broader social and political change. Under circumstances which remain unclear, protests escalated into violence. Security forces responded with excessive and lethal force to the protests and the subsequent unrest, and as a result of these events, over 200 people were killed and thousands injured.

Authorities detained over 10,000 people, including people who were peacefully protesting in connection with the January events.

Over 5,000 criminal cases have been initiated relating to these events. The CIVICUS Monitor and its research partners International Partnership for Human Rights (IPHR) and Kazakhstan International Bureau for Human Rights and Rule of Law (KIBHR) are seriously concerned that those charged with rioting and other criminal offences following the January events include activists believed to have been targeted in retaliation for their peaceful and legitimate civic engagement. Additionally, there are widespread allegations of due process violations and torture and ill-treatment of people detained, with eight detainees having died in custody, according to official information.

We are particularly concerned about the failure of authorities to independently investigate the ‘Bloody January’ events, with the investigation process initiated by the government lacking impartiality. While  President Tokayev has vowed that all allegations of abuse in detention will be investigated, authorities have also failed to carry out thorough, impartial and effective investigations into such allegations and to adequately protect victims. It is of further concern that there have been reports about acts of intimidation and harassment of civil society actors working to document and assist victims of violations.

“The authorities must investigate all violations reported in connection with the January events, in full accordance with international standards, and hold accountable all those responsible for unlawful detentions, excessive use of force, torture and other abuses. The authorities must not obstruct civil society efforts to document violations and assist victims but should instead cooperate with such initiatives in the interests of promoting access to truth and justice,’’ said Brigitte Dufour, Director of IPHR.

The CIVICUS Monitor, IPHR and KIBHR are also concerned that the right to peaceful assembly is continuously being restricted in Kazakhstan. The revised law on assemblies, adopted in 2020 de-facto retains the requirement to obtain advance permission for holding assemblies, although it formally provides for a notification procedure. Peaceful protests are regularly dispersed, with protesters being detained and penalised.

Journalists continue to work at the risk of intimidation and harassment, including politically motivated legal cases. During the January events, media workers faced a series of harassment, including physical attacks perpetrated by security forces and non-state actors, resulting in several journalists being injured and one person affiliated with a media outlet being killed. None of those responsible for these attacks are known to have been held accountable.

Authorities have increasingly cracked down on opposition movements, including the two banned movements, the Democratic Choice of Kazakhstan and the Koshe (Street) Party, and the unregistered Democratic Party of Kazakhstan. People affiliated with these groups are being detained, questioned and prosecuted because of their peaceful exercise of the freedoms of expression, association and assembly. In a high-profile case, Democratic Party leader Zhanbolat Mamai is currently  facing spurious criminal charges believed to have been initiated to penalise him for his opposition activities.

“If the authorities truly want to create a new Kazakhstan, they should stop persecuting civil society activists, opposition supporters, independent journalists and others who criticise the government and demand democratic and social change. They should release all individuals recognised as political prisoners by human rights groups, and drop the cases against those charged in retaliation for their legitimate exercise of fundamental freedoms,’’ said Yevgeniy Zhovtis, Director of KIBHR.

Kazakhstan is now rated Repressed  by the CIVICUS Monitor. There are a total of 50 countries in the world with this rating (see all). This rating is typically given to countries where civic space is heavily contested by power holders, who impose a combination of legal and practical constraints on the full enjoyment of fundamental rights (see the full description of ratings).

*** IPHR and KIBHR cooperate with the CIVICUS Monitor on the preparation of regular updates on civic space developments in Kazakhstan. The newest update is available here.