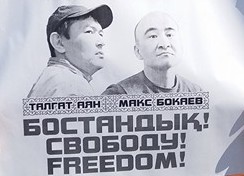 Geneva-Paris-Brussels-Almaty, 11 October 2016. The day before the trial against human rights defenders Max Bokayev and Talgat Ayan begins in Atyrau (Kazakhstan), national and international human rights organisations are calling for the proceedings to be conducted in full compliance with international due process and fair trial standards. These organisations will monitor the trial, including in the framework of the Observatory for the Protection of Human Rights Defenders (OMCT-FIDH partnership) and the Civic Solidarity Platform (CSP) – a network of over 80 human rights NGOs from across Europe, the former Soviet Union and North America.

The judicial harassment and the arbitrary detention of Max Bokayev, a prominent civil society activist who heads the NGO “Arlan”, and Talgat Ayan, a lawyer and activist, have been ongoing since 17 May 2016. On that day, they were both arrested in Atyrau in retaliation for their crucial role in the peaceful protests against controversial amendments to Kazakhstan’s Land Code that took place in Kazakhstan in April and May, as well as their critical statements on this issue on social media platforms. In response to the peaceful land reform protests, the Kazakhstani authorities adopted a predominantly repressive approach including by detaining well-known civic activists and civil society leaders, as well as by refusing to grant authorisation for peaceful rallies.

“The criminal cases against Max Bokayev and Talgat Ayan appear to be aimed at punishing them because of their criticism of the Land Code reform and at sending a chilling message to civil society in the country. We urge the Kazakhstani authorities to ensure that the proceedings are carried out in full compliance with the right to a fair trial, as guaranteed by international law and to acquit the two defenders”, the five organisations declared.

The trial against Max Bokayev and Talgat Ayan will begin at Atyrau’s City Court No. 2 at 10.30 am on 12 October 2016. The two human rights defenders are facing charges for of “institution inciting of social discord” (Criminal Code Article 174), “dissemination of knowingly false information” (Article 274) and “violation of the procedure of organisation and holding of meetings, rallies, pickets, street processions and demonstrations” (Article 400) and face imprisonment for a term of up to ten years. Both were remanded to pre-trial detention in spite of requests for house arrest for medical reason. Max Bokayev suffers from chronic hepatitis C and needs constant medical care.

“Our organisations will have trial observers monitoring this high-profile and precedent-setting trial where not only two human rights defenders, but the very right to peaceful protest in Kazakhstan is on trial. Moreover, we have received particularly worrying reports about attempts of intimidation of local trial observers and we therefore call on the government of Kazakhstan to fully respect the principle of transparency and publicity of judicial proceedings by ensuring unhindered access for all national and international observers”, the five organisations said.