Home 2022 Killing of civilians in Katyuzhanka, Ukraine: New report by IPHR and partners 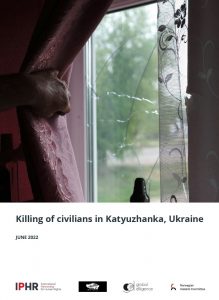 Truth Hounds, Global Diligence LLP, International Partnership for Human Rights (IPHR), and Norwegian Helsinki Committee present a new joint report “Killing of civilians in Katyuzhanka, Ukraine”, based on organisations’ findings obtained during a fact-finding mission to Katyuzhanka on 17-20 May 2022. Members of the fact-finding team interviewed over two dozen village residents, who witnessed the events described in this report or whose family members were killed by the occupying Russian forces.

Katyuzhanka is a civilian settlement in Kyiv Oblast, located approximately 60 km north of Kyiv. It sits on two key roads connecting Belarus to Kyiv. The settlement had a pre-war civilian population of approximately 4,000.

Between 25 February 2022 and 31 March 2022, Katyuzhanka was used as a thoroughfare for Russian military convoys and was occupied (and used as a logistics hub) by the Russian Armed Forces, including – but not limited to – Russian Naval Infantry, special forces of the Ministry of the Interior (“OMON”), and forces identified as “Chechens” and “Buryats” (likely members of the Russian National Guard).

During the occupation, at least four civilian vehicles carrying civilian passengers were attacked by Russian forces on and around the main road through Katyuzhanka (Kyivska Street). Five civilians were killed in three separate incidents on 25 February and a further two civilians died as a result of an attack on 28 February.

These attacks, which resulted in the death of seven unarmed civilians in Katyuzhanka, represent a flagrant violation of the fundamental principle of distinction. Under the Rome Statute of the International Criminal Court (ICC), they amount to the war crime of intentionally directing attacks against civilians not taking part in hostilities.