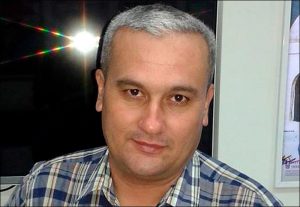 On 9 August, Uzbekistani journalist Bobomurod Abdullayev was arrested in Bishkek by officials of the State Committee for State Security (SKNB) of Kyrgyzstan. Amnesty International, Association for Human Rights in Central Asia (AHRCA), Civil Rights Defenders, International Partnership for Human Rights (IPHR), Freedom House, Freedom Now and the Norwegian Helsinki Committee (NHC) urge the Kyrgyzstani authorities to protect him from forced return to Uzbekistan where he would be at real risk of torture and other ill-treatment. In Uzbekistan, the journalist is wanted on what appear to be trumped-up anti-government charges carrying a punishment of up to 20 years’ imprisonment, the groups said.

In an official statement made on 9 August, the Kyrgyzstani security services stated that Abdullayev had been arrested under the 1993 Minsk Convention for Legal Assistance and Legal Relations on Civil, Family and Criminal Matters pursuant to an extradition request from Uzbekistan. He is currently being held in a security service temporary-detention centre in Bishkek.

“We remind Kyrgyzstan of its non-derogable international obligation under Article 3 of the Convention against Torture and Other Cruel, Inhuman or Degrading Treatment or Punishment which forbids any state from returning, extraditing or refouling any person to a state where there are substantial grounds for believing that he would be in danger of being subjected to torture – Abdullayev must not be sent back to Uzbekistan”, said Brigitte Dufour, Director of IPHR.

In early 2020 Abdullayev became worried about his security after the Canada-based Uzbek journalist Ismat Khushevim named him as the possible author of several articles criticizing the authorities on an anonymous website.

In February 2020 Abdullayev travelled to Bishkek from Germany on an official invitation to follow a four-month course as part of a programme for independent journalists and former political prisoners at the American University of Central Asia which ended on 1 July. When his stay at the university ended, he was unable to leave Kyrgyzstan as the borders were closed due to the COVID-19 pandemic. On 13 July, the American University of Central Asia informed him that officials from the Kyrgyzstani security services were trying to locate him. Earlier in July 2020 Abdullayev told AHRCA  that he was concerned about his security as he feared the Uzbekistani security services wanted to question him or abduct him after several anonymous persons had posted online accusing him of being the author of the above mentioned critical anonymous publications.

“When Bobomurod Abdullayev was last in the hands of the Uzbekistani security services, they tortured him for days on end – and there is a significant risk that he would be tortured yet again if sent back”, said Nadejda Atayeva, President of the Association for Human Rights in Central Asia.

Abdullayev is wanted for prosecution in relation to charges including attempting to overthrow the President (Article 158 of the Criminal Code) and the Constitutional regime (Article 159), punishable by up to 20 years’ imprisonment. The charges are believed to be linked to a series of publications critical of President Mirziyoyev and his family posted on Facebook under the pseudonym Qora Mergan and on an anonymous site registered in Canada under a different pseudonym. Abdullayev has categorically denied being the author of these publications and the Uzbekistani authorities have reportedly produced no credible evidence to seriously implicate him.

On 10 August, Pervomaisky District Court in Bishkek held a remand hearing and ruled to detain him until 8 September 2020. The Kyrgyzstani court confirmed that he is wanted in Uzbekistan on the above-mentioned charges. On 10 August, Abdullayev applied for refugee status.

“Bobomurod Abdullayev is being targeted as an independent journalist.  Kyrgyzstan must live up to its international human rights obligations and release him so that he can seek asylum,” said Marie Struthers, Director, Amnesty International Regional Office for Eastern Europe and Central Asia.“

Abdullayev was arrested on 27 September 2017 in Tashkent by officers of the State Security Service on anti-constitutional charges which were widely believed to have been politically motivated. He was held for several months in detention during which time he reports being tortured in order to force him to testify against himself and several other people including political opposition leaders, critics, civil society activists, and former diplomats. At a court hearing in 2018, Abdullayev admitted writing a series of articles under the pseudonym “Usman Khakhnazarov” which were critical of former President Karimov. Abdullayev was released from 7 May 2018 and vowed that he would not write anonymous articles again.

Since his release from detention, Abdullayev has been regularly subjected to surveillance and harassment by Uzbekistani security services.