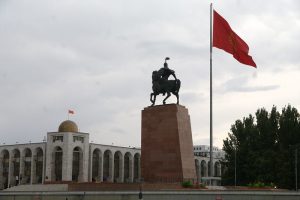 The EU will hold human rights focused talks with Kyrgyzstan’s government in Bishkek this week. As the meeting comes at a time when the environment for free speech and civic engagement continues to deteriorate in Kyrgyzstan, it is important that the EU issues a strong call for an end the widening campaign against dissent in the country.

Current key concerns are documented in a written briefing prepared by International Partnership for Human Rights (IPHR) and Legal Prosperity Foundation (LPF) for the EU’s human rights dialogue with Kyrgyzstan.

Under the presidency of Sadyr Japarov, who rose to power in Kyrgyzstan after the October 2020 political crisis, the authorities have stepped up efforts to control public discussion on issues deemed sensitive and to suppress criticism of those in power. There has been growing pressure on media, and increasing intimidation and harassment of journalists, bloggers, lawyers, civil society activists and other critical voices. The tactics used against critics range from online threats and surveillance to detention, interrogation and criminal prosecution in apparent retaliation for their journalistic and civic activities.

Those who cover high-level corruption are at particular risk, as seen in the case of journalist Bolot Temirov. He is currently on trial on a spate of charges initiated against him following the publication of investigations into high-level government corruption on TemirovLive, his You-Tube based outlet. Several outspoken individuals have been criminally charged because of social media posts on issues of public interest, which the authorities have argued contain ‘’incorrect’’ information and elements of ‘’incitement’’ to hatred or riots. Next TV’s director Taalaibek Duishenbiev and bloggers-activists Adilet Ali Myktybek, Yrys Zhekshenaliev and Aizhana Myrsalieva are all facing such charges because of social media posts on issues such as the government’s policy concerning Russia’s military aggression in Ukraine, the government’s plans for the Jetim-Too iron ore and inter-ethnic relations. Other bloggers have been ‘’prophylactically’’ summoned and warned not to post ‘’incorrect’’ information.

A new law on the protection against ‘’incorrect’’ information on the internet, which was adopted last year, grants the authorities a concrete tool for cracking down on disinformation in the name of countering disinformation. According to this law, the government may – without court approval — initiate the blocking of online resources based on complaints received about allegedly ‘’false’’ information posted on the resources in question. The 24.kg and ResPublica news sites were both ordered blocked based on such complaints, although the decision in the former case eventually was withdrawn. Kaktus.media was accused of spreading ‘’incorrect’’ information when reposting a foreign article about border hostilities with Tajikistan and came under investigation for ‘’war propaganda’’ on these grounds.

In several controversial rulings issued in recent months, local courts have sanctioned the decisions of local authorities to ban peaceful protests outside the Russian embassy and at other places in the centre of the capital Bishkek for several weeks a time. These blanket bans, which have been primarily aimed at preventing peaceful protests against Russia’s war in Ukraine, have not met the strict requirements of international law for permissible limitations on the freedom of peaceful assembly. Law enforcement authorities have also used the court decisions to justify detentions of peaceful protesters.

Following the adoption of a new unjustified and discriminatory financial reporting scheme for NGOs last year, some decision makers have called for re-initiating the so-called ‘’foreign agents’’ law, which parliament previously rejected in 2016. This draft law drew heavily on the corresponding Russian law and required NGOs to adopt the stigmatising label of “foreign agents” if they receive foreign funding and engage in broadly defined “political activities”. Non-liberally oriented activists have also called for the adoption of ‘’foreign agents’’ legislation, demanding that both foreign-funded NGOs and media outlets be labelled this way. The rhetoric used by those advocating for tighter control of NGOs and independent media have fuelled suspicion and mistrust toward these organisations.

Last month, a local court finally acquitted CSO leader Kamil Ruziev of charges brought against him because of his efforts to ensure accountability for unlawful practices of security service officials. The case had been pending with court for two years. However, the prosecution appealed the ruling so Ruziev’s legal struggle is not yet over and he remains subject to travel restrictions.

There is still no justice for Azimjan Askarov, who died of COVID-19 complications in summer 2020 when serving a life sentence handed down in retaliation for his human rights work. While the investigation into his death was re-opened a year ago after first being prematurely closed, there are ongoing concerns about its lack of effectiveness, comprehensiveness and impartiality. The authorities also failed to implement a decision of United Nations Human Rights Committee on Askarov’s case and to grant compensation to his family for the rights violations he suffered.

More detailed information on these and other issues can be found in IPHR’s and LPF’s briefing paper for the EU’s dialogue with Kyrgyzstan: download it here.

The EU-Kyrgyzstan Human Rights Dialogue features human rights-focused discussions between high-level EU officials and representatives of Kyrgyzstan’s government. This year’s dialogue will be the twelfth one; the last one took place in September 2021. It will be held in connection with a visit of an EU mission to assess Kyrgyzstan’s compliance with the EU’s Generalised Scheme of Preferences plus (GSP+).