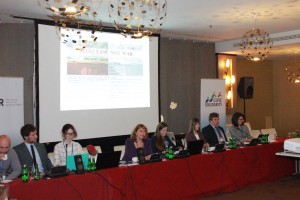 On Thursday 24 September, IPHR hosted the side event “Make Law, Not War — Violations of International Humanitarian Law and International Crimes in Eastern Ukraine” at the 2015 OSCE Human Dimension Implementation Meeting in Warsaw. The event was held in the framework of the Civic Solidarity Platform.

This report documents evidence of war crimes and crimes against humanity perpetrated in the context of the current conflict, including attacks against civilians and civilian objects; deliberate killing of civilians and non-active combatants; unlawful imprisonment; inhuman, degrading treatment and torture of civilians and combatants; appropriation and destruction of property and pillage; and persecution on political and religious grounds. It does not provide an exhaustive catalogue of all crimes committed by all parties during the conflict – it covers only cases where the field mission collected enough evidence to satisfy the ‘reasonable basis’ standard. The report also contains an analysis of relevant international law and prior action by international courts, as well as an overview of the context and history of the conflict. 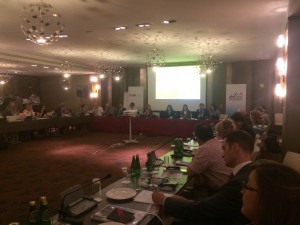 Speaking about the legal qualification of the current conflict, Alex Prezanti, an independent legal expert and partner at Global Diligence LLP, said: “The conflict clearly qualifies as a non-international armed conflict. The conflict may also qualify as an international armed conflict based on evidence that the participants in the conflict include not only Ukrainian citizens, but also members of the Russian armed and security forces, who have been directly engaged in warfare.”

Speaking about the investigation of the crimes committed during the armed conflict in Eastern Ukraine, Eugenia Zakrevska — an attorney representing conflict victims – stated that the Military Prosecutor’s Office has conducted proper investigations into allegations of crimes committed by Ukrainian army and paramilitary formations. However, the workload of this office is enormous and it lacks capacity to investigate all cases in a thorough and timely fashion. The investigation of crimes committed by separatists is problematic. Access to suspects is limited since they are hiding in territories that are not controlled by the Ukrainian government and responsibility for these cases is divided between different institutions, which do not coordinate their efforts.

Oleksandra Matviychuk, Head of the Center for Civil Liberties (Ukraine) stressed that propaganda plays a significant role in the escalation of the conflict and atrocities. Analyses of interviews given by Russian volunteer soldiers fighting in Eastern Ukraine demonstrate that the decision of these soldiers to participate in the fighting often was triggered by media reports. Soldiers said that they decided to join the fighting after seeing TV news on grave atrocities committed by “fascist” Ukrainian soldiers, such as torture or killing of innocent children and other propaganda-type of information.

Speaking about fighting impunity for war crimes, Rachel Denber, Deputy Director of the Europe and Central Asia division at Human Rights Watch, underlined the importance of dialog with the authorities on this issue. As an example, she mentioned an incident involving the use of cluster munition that took place in 2014. After Human Rights Watch documented and publicized this incident, Ukrainian officials showed openness to discuss and further investigate it, even if the ensuing cooperation was not perfect and there is room for improvement. At the same time, it was not possible to initiate any dialogue at all with the leaders of the separatists, who also used cluster munition.

Concluding the session, the speakers stressed the importance of ensuring a full and thorough investigation of all allegations of war crimes and crimes against humanity perpetrated during the conflict in Eastern Ukraine, with a view to bringing those responsible to justice through fair and impartial proceedings whether through the International Criminal Court, domestic courts or a hybrid tribunal.