Just three percent of the world’s population live in countries where the rights to protest, organise and speak out are respected, protected and fulfilled according to the CIVICUS Monitor, which today releases the first-ever global dataset on civic space. CIVICUS also finds that serious civil space violations are taking place in 106 countries, well over half of all UN Member States. Among these are the countries of Central Asia, as well as most other countries of the former Soviet Union (FSU).

“We are happy and excited to be part of this global initiative aimed at tracking and rating civic space worldwide,” said Brigitte Dufour, IPHR Director. “At this time, when conditions for civil society engagement are deteriorating not only in our target region (Central Asia and the wider former Soviet Union) but also elsewhere, coordinated efforts to counteract this alarming trend are needed more than ever,” she continued.

The CIVICUS Monitor rates countries based on how well they uphold the three fundamental civic freedoms that enable people to act collectively and make change: freedom of association, freedom of peaceful assembly, and freedom of expression. 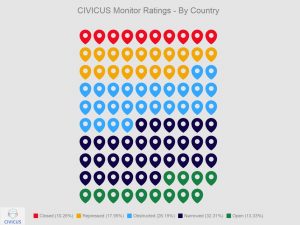 Of the 195 rated, it finds that civic space in 20 countries is closed, a rating characterised by an atmosphere of fear and violence, and severe punishment for those who dare to disagree with authorities. A further 35 countries are rated repressed. Fifty-one countries are rated obstructed and 63 narrowed. Just 26 countries are rated as open, meaning the state safeguards space for civil society and provides platforms for dialogue. On average, countries with more open civic space scale have higher Human Development Index scores, better Gini Index scores and better scores on the Electoral Democracy Index.

Among the Central Asian countries, Turkmenistan and Uzbekistan are rated as closed, Tajikistan as repressed and Kazakhstan and Kyrgyzstan as obstructed. All the other countries of the former Soviet Union expect for Estonia and Latvia are also deemed unfree with respect to civic space: Russia, Azerbaijan and Belarus are assessed as repressed, Armenia, Moldova and Ukraine as obstructed and Georgia and Lithuania as narrowed.

Violations of freedom of association, freedom of peaceful assembly and freedom of expression are, however, not limited to countries outside of Europe. According to the CIVICUS Monitor ratings, only 14 of the current 28 EU member states have an open civic space. EU candidate country Turkey has been given the same rating as Russia, Azerbaijan, Belarus and Tajikistan (“repressed”). Turkey has also been placed on a new Watch List of countries, where there is a serious and rapid decline in civic space.  Other countries on this list compiled by CIVICUS include the USA, Macedonia, Cameroon and Myanmar.

Click here for responsive visualisations of the findings of the CIVICUS Monitor: https://monitor.civicus.org/findings

An explanation of the ratings used can be found here: https://monitor.civicus.org/Ratings/ 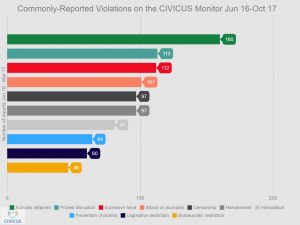 Updates on the situation in Central Asia published by the CIVICUS Monitor on the basis of information from IPHR and its partners have highlighted these types of violations, as well as other recent developments of concern in the countries of this region (these countries can be explored here: https://monitor.civicus.org/newsfeed/).

For more information or to set up interviews with CIVICUS staff and research partners, please contact Deborah Walter, Communication Manager, CIVICUS on media@civicus.org or deborah.walter@civicus.org. Tel: +27-11-8335959

CIVICUS is a global alliance of civil society organisations and activists dedicated to strengthening citizen action and civil society around the world.

See also the most recent updates published by the CIVICUS Monitor on the basis of information provided by IPHR and its partners: Human rights situation still appalling in post-election Turkmenistan; Despite releases, conditions remain dire for civil society in Uzbekistan; Declining civic space in Tajikistan; Current trends regarding freedom of association and peaceful assembly in Kyrgyzstan; Threats to civic space in Kazakhstan: Freedom of association and expression; Threats to civic space in Kazakhstan: Peaceful assembly