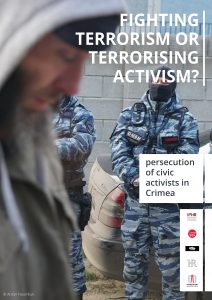 At 06:00 a.m on 27 March 2019, Russian security forces (siloviki) began carrying out a coordinated large-scale operation across the Crimean Peninsula. Doors were broken down, houses were invaded by dozens of masked and heavily armed men, entire settlements were cordoned off and invasive searches were conducted in the homes of the arrestees, their relatives and neighbours.

These raids were a brutal show of force, aimed at destroying the Crimean Solidarity group and gagging the Crimean Tatar community – the most well organized and vocal opposition to Russia’s annexation of the Crimean Peninsula.

The searches, arrests and detention of the 23 Crimean Tatars entailed numerous violations of the European Convention on Human Rights.

To collect evidence of these and other numerous violations of Russian and international law and showcase the alarming situation facing the Crimean Tatar community on the Peninsula, IPHR together with Truth Hounds and Crimea SOS organized a fact-finding mission to Crimea a week after the raids. We present our report based on the evidence and testimonies we collected and the subsequent legal analysis: “Fighting terrorism or terrorising activism? Persecution of civic activists in Crimea”.

The report provides detailed information about the raids, the context of events and legal analysis as well as recommendations to the international community and to the Prosecutor of the International Criminal Court.

Read the report (in English) here.

Link to the UA version is here.

Link to the RU version is here.