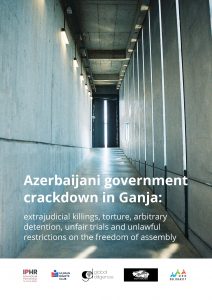 The authors seek to draw the international community’s attention to these events, which typify an entrenched culture of violence and institutionalised use of torture by Azerbaijani law enforcement, the lack of accountability for gross human rights violations, and the absence of an independent, impartial and fair judiciary in Azerbaijan.

The authors call upon the authorities of Azerbaijan to fully investigate the violations set forth in this report, as well as the legal framework, practice and institutional culture that has given rise to such violations and ensuing impunity. We respectfully urge the government of Azerbaijan to prosecute those responsible and to provide the victims of these abuses with an effective and lasting remedy.

The authors also call on the international community to demand justice and accountability for Azerbaijani victims of torture and political repression, and to use national and international legal frameworks to bring those responsible for torture and inhuman or degrading treatment to account. We strongly recommend that all future international investment and trade deals with Azerbaijan are predicated on serious and wholesale reforms to the country’s law enforcement, judiciary and prosecution bodies, and on genuine efforts to route out torture and arbitrary detention from its criminal justice system.

On 3 July 2018, Yunis Safarov – a Russian citizen and resident of Ganja – made an attempt on the life of the then Head of Executive Power of Ganja – Elmar Valiyev. Safarov was arrested, severely beaten inside a Ganja police station, and along with 29 alleged co-conspirators, charged with attempted murder, Islamic terrorism, participation in an illegal armed group and an attempt to seize power.1 Photographs of his injuries were distributed via social media, followed by calls to protest against his ill-treatment. On 10 July 2018, a group of 150 to 200 people came out to protest in front of the Ganja Executive Power building. In the course of an otherwise peaceful protest, a lone attacker named Rashad Boyukkishiev killed two high-ranking police officers (injuring a third). Minutes after Boyukkishiev was allowed to flee the scene, the riot police charged the crowd and began to conduct violent and arbitrary arrests. Over 100 protesters and bystanders were detained and brought to Nizami Police Station in Ganja, where they were subjected to violence, verbal aggression, degrading treatment and/or torture. At least 70 persons were given administrative detention in summary undefended hearings. Following further raids and arrests across Azerbaijan, at least five people were killed and a total of 78 persons were charged with criminal offences, including organizing public disorder, possession of weapons and narcotics, and attacks on public officials. The authorities connected Safarov’s attack with the protest, and publicly accused all detainees of being part of an Islamic conspiracy to attack institutions of State, topple the secular government and establish an Islamic caliphate. At the time of writing, at least 43 detainees have been tried and sentenced to prison terms ranging from five and ten years, with others languishing in unjustified pre-trial detention. Detainees allege inhuman treatment and torture in detention, aimed at inducing false confessions for use in deeply flawed criminal proceedings. Two detainees died in custody pending trial. The authors are not aware of any genuine and effective efforts by the government to investigate the conduct of authorities in relation to these events.

Based on evidence collected and analysed by the authors, there is a reasonable basis to believe that the Azerbaijani authorities’ response to Safarov’s attack and to the 10 July protest was wholly disproportionate to the public order and/or security concerns (if any) raised by these incidents. Having qualified Safarov’s attack and the protest as an Islamist anti-government plot (without any credible evidence in support) the authorities used Azerbaijan’s problematic anti-extremism laws to justify a brutal crackdown on the residents of Ganja. The crackdown occasioned gross violations of fundamental human rights, including the right to life, the prohibition of torture and inhuman and degrading treatment, the right to liberty and security, the right to a fair trial and the freedom of assembly. This crackdown was ostensibly calculated to dissuade future attempts to protest against the government’s dismal record on human rights, corruption and democracy.