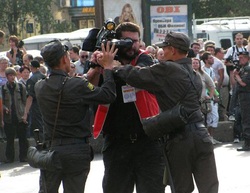 The Norwegian Helsinki Committee, a partner organization of International Partnership for Human Rights, and several other NGOs have produced a manual for journalists travelling to the Olympics in Sochi. The manual covers the political, human rights and environmental context of the winter games, and is part of a campaign to draw attention to the problematic aspects of the winter games in Sochi and developments in Russia regarding human rights and respect for human dignity, which is a central value of the Olympic Movement. The manual also includes an extensive list of useful contacts.

The manual can be downloaded for free here.