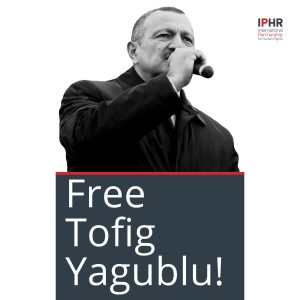 International Partnership for Human Rights prepared an open letter to the President of Azerbaijan Ilham Aliyev to raise our concerns in regard to the sentencing of Tofiq Yagublu on 3 September 2020.

After being arrested on 22 March 2020 and having remained in custody until his trial Tofiq Yagublu, Deputy Chairman of the Musavat opposition political party, was sentenced to four years and three months’ imprisonment after being found guilty on charges of ‘hooliganism’ after an alleged assault on a married couple following a car accident in a trial which did not meet international standards of fairness. We are concerned that the detention and trial of Tofiq Yagublu violated fair trial standards, and Azerbaijani government’s international human rights commitments. IPHR joins other human rights groups in denouncing the charges brought against Tofiq Yagublu as unfounded and believe that they were brought in retribution for Tofiq Yagublu’s political views.

The urgency of this request furthermore stems from the rapidly deteriorating health of Tofiq Yagublu. This is his third imprisonment in seven years. His health was previously affected during his last incarceration from November 2015 to March 2016. Today Tofiq Yagublu is on a hunger strike in protest against his unlawful imprisonment. As we publish this letter it has been fifteen days since he has eaten. Due to his critical condition, Yagublu has been transferred to a hospital where he is under the doctor’s supervision. His condition is reported as critical and rapidly deteriorating.

IPHR is concerned that this case is a further part of the pattern of Azerbaijani government’s crackdown on dissident voices. The persecution of persons on the grounds of their political opinion encroaches on the fundamental right of expression, and is a serious violation of international law.

We are concerned also at reports that in recent days police officers have been deployed to disperse peaceful protesters calling for Tofiq Yagublu’s release and that at least twenty people have been detained.

IPHR strongly condemns the unlawful sentence passed on Tofiq Yagublu and requests President Aliyev to take steps to see that the case is immediately re-examined, and that he is immediately and unconditionally released.

The letter is available here.