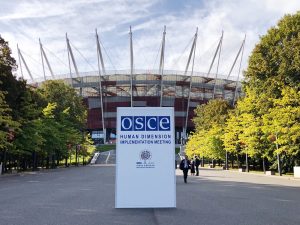 This briefing was prepared by International Partnership for Human Rights for the OSCE Human Dimension Implementation Meeting in Warsaw, Poland in September 2019 and covers concerns regarding the deteriorating situation for independent lawyers in Tajikistan, and includes case examples and recommendations to the Tajikistani authorities.

The situation for independent lawyers in Tajikistan has deteriorated significantly in recent years, as the authorities employ tactics of intimidation, harassment, arbitrary arrest, threats and criminal prosecution to pressure lawyers to drop or refrain from taking up cases and issues considered to be politically sensitive. These often include cases related to allegations of  torture and ill-treatment as well as those involving individuals associated with the banned Islamic Renaissance Party of Tajikistan (IRPT) or to those charged with of “terrorism” and “religious extremism”. Lawyers working on cases related to individuals associated with the political opposition, including cases involving torture allegations have in some cases been charged with national security related offences and in others with fraud. In August 2019, the United Nations (UN) Human Rights Committee raised concern about intimidation, harassment and criminal prosecutions of lawyers working on politically sensitive cases in Tajikistan and harassment of their families.,

Since 2014, several human rights lawyers have been detained on politically motivated charges after unfair trials including Buzurgmehr Yorov and Nuriddin Mahkamov, Dilbar Dodojonova and as well as Shukhrat Kudratov (released), Fakhriddin Zokirov (released) and Jamshed Yorov who fled the country after release, fearing further persecution. Lawyer Muazzamakhon Kadirova who was acting for Yorov and Mahkamov also fled the country in 2017 after she learned that corruption charges were being prepared against her.

The late human rights lawyer Fayzinisso Vohidova was prevented from leaving Tajikistan in May 2017 after posting a public appeal to President Rahmon to cease persecution of Buzurgmehr Yorov. She died in January 2019 of pneumonia.

Legal amendments introduced to the Law on Lawyers (Advokatura) from 2015 further increased the control of the executive over the judiciary. They required both new lawyers and those already practicing law to pass new qualification exams and re-new their licenses to practice law with a Qualifying Commission, operating under the Ministry of Justice. The number of licensed lawyers dropped dramatically after the law was introduced, from 1200 in 2015 to 600 in 2017. In August 2019 the UN Human Rights Committee stated its concern ‘about the insufficient number of lawyers currently practicing in the country (a ratio of 1:13,000) […] attributed to the dramatic drop in their numbers following the implementation of the amendments of November 2015 to the Advokatura and Advocates’ Activities Act that introduced additional qualification criteria for entry to the legal profession and the requirement that all lawyers pass the new qualification examinations’. This reform has had a negative impact on the legal profession as those lawyers who were working on cases perceived as sensitive by the government often did not receive new practice licenses.