Home 2021 Pulling the plug: How Azerbaijan’s government combines technology and fear to control... 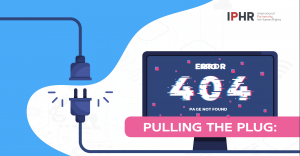 The first anniversary is approaching of last year’s war between Azerbaijan and Armenia in the contested region of Nagorno-Karabakh. During the war, an unprecedented, 46-day long internet shutdown took place in Azerbaijan. A new report published today by International Partnership for Human Rights (IPHR) and Azerbaijan Internet Watch (AIW) shows that plunging the country into digital darkness during these hostilities fits into a broader government strategy of using repressive legislation, state-of-the-art surveillance technology and harassment to control the internet and silence dissent in Azerbaijan.

As the armed forces of Azerbaijan and Armenia began clashing in Nagorno-Karabakh on 27 September 2020, Azerbaijan’s government announced that it would restrict internet access in the country to prevent ‘’Armenian provocation’’. As a result, access to social media platforms, communication apps and other key online resources was throttled in Azerbaijan until 12 November, the day after a ceasefire was declared in the contested region.

The new IPHR-AIW report highlights the devastating impact of the prolonged internet shutdown, which was implemented in violation of the government’s international human rights obligations and deprived residents of the opportunity to use online resources for communication, exchange of information, work and studies. The report’s authors estimate that Azerbaijan’s economy suffered a USD 243 million loss, including both direct and indirect costs as a result of the shutdown.

The report documents how the 46-day shutdown in Azerbaijan was symptomatic of the government’s heavy-handed approach to controlling the internet. In an environment in which the country’s information and communications technology (ICT) sector is monopolized by allies of the regime, the government has for years been monitoring and supressing online dissent by using invasive surveillance tools, arbitrarily blocking access to internet sites, and implementing distributed denial-of-service (DDoS), trolling and other targeted attacks against internet sites and users critical of those in power. The government’s approach is a prime example of digital authoritarianism, which has resulted in serious violations of the right to freedom of expression, the right to privacy and other fundamental rights of citizens.

The IPHR-AIW report also draws attention to how private companies — directly or indirectly — have facilitated the government’s repressive internet policies in Azerbaijan. In particular, it exposes how foreign tech companies have provided the government with sophisticated and intrusive surveillance technology used as part of its campaigns against dissent. The recent Pegasus Project revelations, reported last month are the most recent example of this trend. However, the IPHR-AIW report’s authors found significant evidence to suggest that Azerbaijan’s government has used surveillance technology purchased from foreign companies such as Allot, Sandvine, NICE and others to spy on journalists, human rights defenders and civil society activists since 2009.

The IPHR-AIW report ends with a set of recommendations to relevant actors at the national and international level. It calls on international institutions and foreign governments, which engage with Azerbaijan’s government to:

The report, entitled “Pulling the plug: How Azerbaijan’s government combines technology and fear to control the internet” is available here.