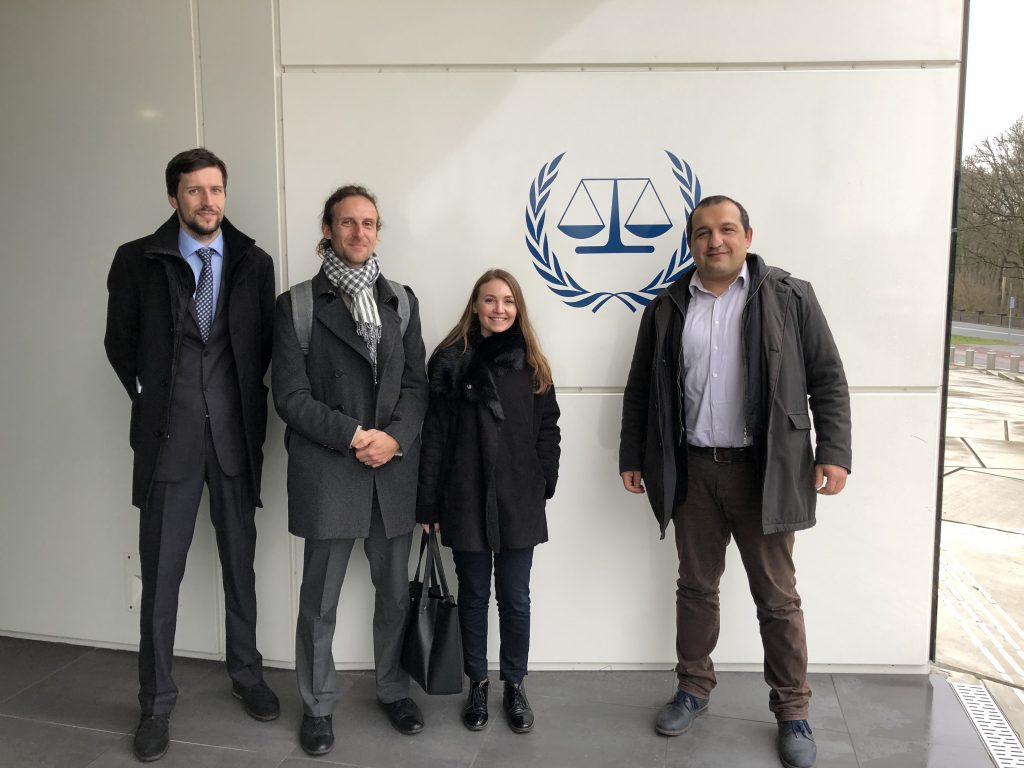 On March 6, Simon Papuashvili of the International Partnership for Human Rights (IPHR) and Alexandre Prezanti of Global Diligence LLP filed their fourth communication to the Prosecutor of the International Criminal Court (ICC) in relation to international crimes in Ukraine. The filing presents a case against a key military commander based on evidence collected by local partners Ukrainian Helsinki Human Rights Union and Truth Hounds. After nearly five years of preliminary examination, Prezanti and Papuashvili are calling on the ICC Prosecutor to review her policy on preliminary examinations and open an investigation on the Ukraine situation.

The International Criminal Court (ICC) Prosecutor launched her preliminary examination into the situation in Ukraine on 25 April 2014. Over the last five years, hundreds of victims and witnesses – assisted by civil society – have submitted credible evidence of a macabre catalogue of war crimes and crimes against humanity committed by a range of actors on Ukrainian territory. The Prosecutor has a legal duty to initiate a full investigation as soon as there is a ‘reasonable basis to believe’ that a crime within the Court’s jurisdiction has taken place, and that such a case would be admissible.

Since 2014, the Prosecutor is yet to formally decide on whether any ICC Statute crimes have taken place in Ukraine.

This ostensive inertia is undermining public trust and alienating civil society – on whom the ICC relies at this stage in proceedings – and is diminishing the prospect of successful convictions, whilst the ICC loses its deterrent effect.

We call on the Prosecutor to reconsider her approach to preliminary examinations in order to safeguard the effectiveness of investigations, retain public trust and uphold victims’ fundamental rights.

A preliminary examination is a filter for separating credible criminal allegations that fall within the ICC’s remit from the inevitable barrage of irrelevant, inadmissible and unsubstantiated complaints. According to Article 53 of the ICC Statute, ‘reasonably believable’ allegations that would be admissible before the Court shall be sent on for full investigation – triggering much greater resources and investigative powers. However, the Prosecutor has no legally imposed deadline for doing so. In Georgia this process took nearly eight years. A preliminary examination on Colombia has been ongoing since 2004.

On 6 September 2018, ICC judges reminded the Prosecutor that a preliminary examination ‘must be completed within a reasonable time […] regardless of its complexity’ and that ‘a prolongation of a preliminary examination beyond [assessing the relevant facts] is, in principle, unwarranted’. The judges pointed out that the preliminary examination process does not warrant ‘complex or detailed process of analysis’ or require the available information to be ‘comprehensive’ or ‘conclusive’. Crucially, the judges reminded the Prosecutor that delays inevitably undermine the effectiveness of investigations, since ‘with the lapse of time, memories of witnesses fade, witnesses may die or become untraceable, evidence deteriorates or ceases to exist, and thus the prospects that any effective investigation can be undertaken will increasingly diminish’. Finally, according to the judges, such delays undermine the victims’ rights ‘to the truth, to have access to justice and to request reparations’.

The threshold for a full investigation has been met

For five years intrepid members of Ukrainian, Russian and international civil society have collected hundreds of witness and victim statements, reels of video and photographic evidence, satellite imagery, internet scrapes, ballistics, crater and medical analysis, documents and other forms of evidence. We have compiled and analysed this information to formulate credible allegations of war crimes and crimes against humanity, namely deliberate and indiscriminate attacks on civilians and civilian objects, murder, enforced disappearance, torture, sexual violence, illegal detention, pillage, persecution and other forms of cruel, inhuman and degrading treatment. The Prosecutor has received over 80 other submissions from civil society organisations and state actors. It is our firm belief that the threshold for a full investigation has been met.

We can only speculate as to the reasons for this apparent inertia, as there is no judicial oversight in this case.

Nevertheless, in December 2018, the Prosecutor announced that her office is yet to determine whether any ICC Statute crimes have taken place in Ukraine. We can only speculate as to the reasons for this apparent inertia, as there is no judicial oversight in this case. (Ukraine hasn’t ratified the ICC Statute and therefore has no right to seek judicial review of the Prosecutor’s progress.) The lack of adequate resources may well be a key factor, yet it remains unclear why so little of the Prosecutor’s €46 million annual budget is allocated to the Jurisdiction, Complementarity and Cooperation Division – the gatekeepers of the Court’s caseload.

Victims and witnesses are losing interest

Whatever the reasons, the Court’s slow pace of progress on Ukraine has already had a detrimental effect of the prospect of successful prosecutions. Faced with a lack of tangible results in exchange for the risks, countless man-hours and resources spent on providing the Prosecutor with the evidence she needs to take the case forward, civil society organisations are beginning to re-direct their resources to other projects. NGOs have sited psychosocial support for victims, truth and reconciliation initiatives in contact-line communities and political advocacy as being more ‘worthwhile’ than documenting crimes.

In the meantime, key suspects have died and a growing number of witnesses have lost interest in providing evidence to the ICC.

The unintended effect of the ICC’s inertia is the drying up of the very source on which its preliminary examinations rely. In the meantime, key suspects have died and a growing number of witnesses have lost interest in providing evidence to the ICC. The initial deterrent effect of the ICC’s involvement on would-be criminals is waning. As key evidence deteriorates or is left undocumented, so do the prospects of achieving justice.

We believe that a balance must be struck between the need for a broad enquiry to identify those most responsible for the largest number of the most serious crimes, and the need to demonstrate tangible results through fair and expeditious justice.

To this end, we believe that a more flexible and proactive approach to preliminary examinations and investigations is required. Manageable representative cases, for which sufficient evidence to prosecute is identified at an early stage, should be severed from the broader inquiry and streamlined through the investigative process. This would allow for quicker more manageable investigations and trials, in tandem with an ongoing broad enquiry. Moreover, the prosecution of specific criminal episodes, field commanders and key cadre will feed evidence into the broader enquiry and help to build stronger cases against those up the chain of hierarchy. This is what we hope to achieve through our latest filing – by identifying an emblematic candidate for prosecution.

This op-ed was originally published at: www.justiceinfo.net