Home 2021 Georgia: ‘It felt like the whole country was against us’ – Investigation... 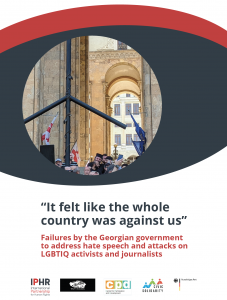 DISCLAIMER: We have removed a previous version of this report because it didn’t properly credit certain individuals. We are very grateful to Mariam Nikuradze and Shota Kinche, as well as others, for having provided the photos featured in the report.

International Partnership for Human Rights (IPHR) and partners today publish a new report, “‘It felt like the whole country was against us’ – Failures by the Georgian government to address hate speech and attacks on LGBTIQ activists and journalists“, which presents the findings of an investigation into the violent attacks against journalists and LGBTIQ activists that shook Tbilisi during Pride Week 2021, leaving one journalist dead and a further 54 people injured.

This new report is the first to present a thorough evidence-based analysis of the July 2021 events. In researching information for the report,  IPHR and Truth Hounds combined first-hand accounts from victims and witnesses of the attacks with open-source information to conduct an empirical analysis of anti-LGBTIQ violence in Georgia that is both politically impartial and human rights focused.

The report underlines the urgent need for Georgian public officials of all political stripes to take steps to implement their domestic and international commitments to protect media freedom and the rights of minorities, to ensure proper safeguarding of public assemblies, and to uphold the law by impartially investigating and prosecuting those responsible for violence against journalists, activists, and members of sexual minorities.

The report concludes by setting out a number of key recommendations to tackle the problem of anti-LGBTIQ violence and hate speech in Georgia, including:

The report is available here.