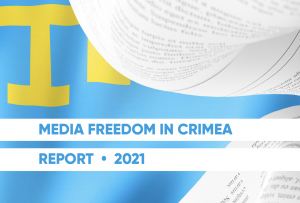 This report by International Partnership for Human Rights (IPHR) presents evidence of violations of fundamental human rights in relation to individual journalists, media organisations, civil society organisations and the legal community in Crimea.

IPHR collected evidence of procedural and substantive violations of international and regional human rights law and disregard for other international standards in the Russian authorities’ treatment of media professionals and other civic actors (lawyers, NGOs). The report seeks to draw the international community’s attention to the bigger picture of systematic repression and silencing of dissent and criticism of Russian rule over the Crimean Peninsula.

Our findings show that the response of the Russian authorities in relation to media freedom has resulted in violations of key human rights standards, including: