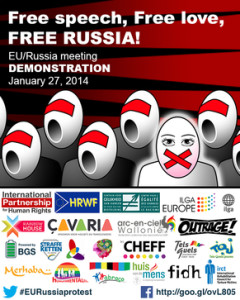 On 27 January, a demonstration in support of civil society will be held in Brussels coinciding with the forthcoming EU-Russia summit. Participants aim to direct the attention of EU officials towards the ongoing repressions in Russia against civil society organizations, political activists, minority groups and the LGBT community. The goal of the demonstration is to speak out against homophobia, xenophobia and the crackdown on civil society.

In Russia, the human rights situation has progressively deteriorated since 2012, with a continuing clampdown on civil society. A raft of punitive laws cracking down on the freedoms of expression, association and assembly has been issued. Since the widely contested parliamentary and presidential elections in 2011-2012, hundreds of people have been detained during peaceful protests and criminal proceedings have subsequently been initiated against several protesters. While some were released following the latest amnesty law of 18 December 2013 and a presidential pardon, many other peaceful protesters still remain behind bars.

Across Russia hundreds of non-governmental organizations (NGOs) have been targeted with “inspections”, including election watchdogs, human rights, LGBTI and environmental NGOs. Many face the risk of fines and closure under the “foreign agent’s law”. At least five organizations have already closed directly as a result of this law.

Discriminatory legislation introduced within the last year has targeted the LGBTI community. LGBTI activists were violently attacked during peaceful protests by anti-gay activists but no action was taken against their attackers despite overwhelming video and photo evidence and witness testimonies.  Xenophobic attitudes have also been on the rise and mass raids against migrant workers by the police have become more frequent in recent years.

Representatives of Brussels-based human rights NGOs, activists, the three regional LGBTQI organizations in Belgium and their members, civil society representatives from Russia and Belgium are calling on the EU leaders to raise human rights violations in Russia at every opportunity, including at these forthcoming meetings.