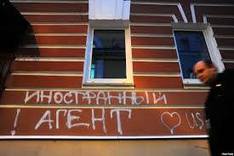 A new report entitled “The Judicial Dimension of the NGO crackdown – The Application of the Foreign Agents Act by Russian Courts” summarizes the findings of a ten-month trial monitoring project implemented by International Partnership for Human Rights in the framework of the Civic Solidarity Platform (CSP).

In the period July 2013-May 2014, CSP experts monitored over 30 court hearings affecting leading Russian human rights NGOs under the notorious Foreign Agents Act, which entered into force in November 2012. While this law requires NGOs that receive foreign funding and engage in ill-defined “political activities” to register as a “foreign agent” (a synonym for “spy” in Russian), violations of it may result in large fines, suspension of the operations of NGOs and prison terms for their leaders.

The report concludes that the Foreign Agents Act introduces excessive and unnecessary requirements for NGOs and provides for overly harsh penalties for non-compliance. The Act in question is couched in terms that are vague and liable to an overly broad interpretation. The result, as shown in the report, is inconsistent application of the law by Russian courts.

No issues as regards the independence and impartiality of the tribunals were raised in any of the cases monitored by CSP observers. The proceedings were generally open to the public wishing to attend and the equality of arms and the principles of adversarial proceedings were generally respected.  Nevertheless, in none of the cases monitored by CSP observers, have the courts examined if and to what extent the restrictions imposed by the Foreign Agents Act were substantiated and proportionate to the legitimate aim pursued, or whether the prosecutors’ justifications were relevant and sufficient.  Thereby, the courts failed to fulfill their function of providing scrutiny, choosing instead to rubber-stamp the prosecutor’s charges.

The Foreign Agents Act may be regarded as creating a basis for unwarranted interferences with the freedom of expression and freedom of association, in breach of the relevant provisions of the European Convention on Human Rights (ECHR). By providing for stricter governmental control over some types of lawful NGO activities, as well as over NGOs receiving foreign funding, the Foreign Agents Act may also be regarded as being in breach of the non-discrimination provisions of the ECHR.

The report concludes that the foremost recommendation to the Russian government is to repeal the provisions of the Foreign Agents Act as contradicting the Russian Constitution and the ECHR and other international treaties to which Russia is a party. As a minimum, the term “foreign agent” must be substituted by a less misleading term and the definition of “political activity” must be clearly defined and strictly applied to activities that have political nature. As long as the infamous law remains in force, the Russian courts bear responsibility to ensure that proceedings related to its application are conducted in compliance with the requirements of the ECHR, as well as the case law of the European Court of Human Rights.