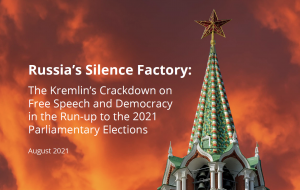 The Russian authorities deploy significant efforts to portray Russia as a functioning democracy, and to position its system of governance as a viable alternative to liberal democracy. At the same time, the Kremlin continues to rely on foreign trade and investment. Consequently, it is vital to document and expose the consequences of the ongoing crackdown as evidence of the Kremlin’s disregard for democracy, human rights and the rule of law.

This report by International Partnership for Human Rights (IPHR) documents the Russian leadership’s crackdown on free speech and democracy ahead of the 2021 Parliamentary elections and ensuing human rights violations.

Furthermore, it aims to draw the international community’s attention to the pre-election crackdown and the shrinking civic space in Russia, and secure international support for Russian human rights defenders and independent media.

To this end, IPHR makes the following recommendations to the international community: