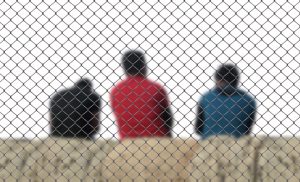 Chechen police abducted Magomed Gadaev, an asylum seeker from Chechnya, in the Russian Federation, and a key witness in a high-profile torture investigation against Chechnya’s authorities, two days after he was wrongfully deported from France to Russia on 9 April. Chechen police continue to hold him in custody. Twelve Russian and international human rights organizations said that Gadaev is at high risk of torture, as a result of the actions by the French, Russian and Chechen authorities which violated international human rights law.

French authorities outrageously proceeded with Gadaev’s expulsion despite the decision by the national asylum court prohibiting his expulsion if it meant his return to Russia due to substantiated fears for his life and safety. French authorities’ actions have put him at immediate risk of torture and other ill-treatment and exposed him to a grave danger to his life, in flagrant violation of France’s international obligations prohibiting the return of any person, whatever the circumstances, to a territory where they are at risk of serious human rights violations. This prohibition is a non-derogable norm of international law and is affirmed by numerous human rights treaties ratified by France.

On 10 March, the national asylum court issued a ruling that the authorities should not expel Gadaev if it would mean he was returned to Russia because it would likely expose him to harm. But on the morning of 9 April, French authorities forcibly put Gadaev on a flight from Paris to Moscow.  On arrival in Moscow, Russian border guards held Gadaev at Shemetyevo airport’s transit zone for over 12 hours, denying him access to his lawyer, Semyon Tsvetkov.

According to Tsvetkov, he repeatedly inquired with the border guards why they were holding Gadaev, who was not on a wanted list in Russia. A border officer hinted to the lawyer about an “agreement” to put Gadaev on a flight to Grozny, Chechnya’s capital, but he did not answer Tsvetkov’s questions as to who “agreed” to this, and on what basis.

In his conversation with border officials, Tsvektov emphasized that Gadaev did not want to be transferred to Chechnya, where his life would be in danger.   Finally, after hours of negotiations, the border guards consented to put Gadaev on a flight to Novy Urengoi, a town in the far north of Russia where his close relatives reside. Fearing for his client’s safety, Tsvetkov boarded the same flight. Gadaev and Tsvetkov arrived in Novy Urengoi on 10 April. According to his family members, soon after the flight landed, two Chechens apparently linked with Chechnya’s authorities came to the home of Gadaev’s relatives demanding to see Gadaev and threatening the family with retaliation if they refused to cooperate.

Shortly afterwards, Gadaev and Tsvetkov noticed surveillance of the apartment building where they were staying and received an informal warning from sources in Chechnya that Chechen police were on their way to Novy Urengoi to detain Gadaev. They went to the police station, reported the threats and apparent surveillance to the Novy Urengoi police, and asked for protection. After filing the report, they wanted to leave Novy Urengoi immediately. However  the police argued that in the interests of their safety they should either stay at the station or return to the apartment and they would post several police officers there to ensure their security. They opted for the latter.

On 11 April, at around 13:00 local time, the police asked Gadaev and Tsvetkov to go to the local office of Russia’s Investigative Committee to complete some paperwork connected to the report they filed. However, as soon as they left the apartment building, men who failed to identify themselves but whom Tsvetkov believes to have been Chechen law enforcement officials in plain clothes forced Gadaev into a car. When Tsvetkov attempted to get into the car as well, one of the men pushed him away and said they were taking Gadaev with them and that Tsvetkov should go to the police station where the police would provide relevant information. The local uniformed police officers present at the scene did not intervene.

When Tsvetkov arrived at the station, police told him they knew nothing about Gadaev’s whereabouts or the identity of those who took him away. Later, the police informally suggested to Tsvetkov that Gadaev may have been detained in connection with a criminal investigation in Chechnya.

The manner in which the Chechen men took Gadaev bears all the hallmarks of an abduction-style detention. The course of events strongly suggests that the police in Novy Urengoi acted in collusion with the Chechen police by making sure Gadaev remained in the city until the arrival of law enforcement officers from Chechnya and then effectively handed him over to them in violation of due process.

On 12 April, Tsvetkov travelled to Grozny seeking information about his client. The police and the prosecutor’s office claimed they were not aware of the case. However, according to Gadaev’s family members, on the morning of 13 April, Chechen security officials brought him to his parents’ home in the village of Zakan-Yurt to speak briefly with his mother. Gadaev was not visibly hurt. The officers did not explain why they were holding him and quickly led him away, telling his mother that he would not come to harm.

Before his detention Gadaev had repeatedly told Tsvetkov and his relatives that in the event that Chechen authorities detain him and then present a written confession to any crime, it could only mean that the confession had been coerced under torture.

At around 18:00 Moscow time, Tsvetkov finally learned that Gadaev was being held at the Urus-Martan police department. The officer on duty at the gate of the compound confirmed this to Tsvetkov but did not let the lawyer gain access to his client and did not provide any information as to Gadaev’s status in custody or if there were any charges against him.

On 14 April, Tsvetkov finally saw Gadaev at the Urus-Martan police department. Gadaev looked subdued, although visibly unharmed, and told Tsvetkov that he no longer needed his services and already had another lawyer representing him. He also made a written a statement confirming this, but the police did not provide a copy to Tsvetkov. Based on a conversation between police officers, which Tsvetkov overheard, he learnt that Gadaev was to be placed under arrest on charges of illegal possession and circulation of arms (Article 222 of Russia’s Criminal Code) and would be jailed in Grozny pending trial.

There are strong grounds for concern that Gadaev refused the services of his trusted lawyer under duress. He remains at imminent risk of torture and other ill-treatment, and his life is in danger. Torture in Chechnya is widespread. Gadaev is also at risk of an unfair trial.

We also note with great concern that in the months following last year’s horrific murder of Samuel Paty, a teacher in a town on the outskirts of Paris, by 18-year-old Chechen refugee Abdullakh Anzorov, the number of Chechen asylum seekers being deported from France has been on the rise. According to Comité Tchétchénie, a French non-governmental group working to stop human rights abuses in Chechnya, between November 2020 and April 2021, the French authorities deported at least eight asylum seekers of Chechen origin, including Gadaev, to Russia. Two of them – Ilyas Sadulaev, deported from France on 12 March, and Lezi Artsuev, deported from France on 5 April – have disappeared upon return to Russia.

What happened to Gadaev immediately after his return to Russia provides one more stark example of the lack of internal flight alternative elsewhere in the territory of the Russian Federation for asylum seekers from Chechnya.

The French authorities should urgently liaise with the Russian authorities regarding Gadaev’s case to ensure that he does not suffer any violation of his rights, including his rights to life, to be free from torture, to liberty and security, to a remedy and protection of the law and, if he is facing charges, to a fair trial.

As Gadaev’s deportation was conducted in violation of international law and contrary to the ruling of the national asylum court, the French authorities should also take immediate steps to enable Gadaev’s return to France. The French authorities should suspend all pending deportations and extraditions to Russia of Chechens who face a well-founded risk of torture and instead take meaningful steps to provide them with international protection.

Magomed Gadaev, 37, suffered arbitrary detention and torture from November 2009 to April 2010 in an unlawful detention facility located in a basement on the riot police (OMON) compound in Chechnya. Upon his release, he provided witness testimony about torture and extrajudicial executions perpetrated by the police officers, as part of an official criminal investigation into the abduction and torture of Islam Umarpashaev – another man arbitrarily detained in the same basement.  Russian authorities opened the case as a result of relentless efforts by one of Russia’s leading independent human rights organizations, the Committee Against Torture. However, in spite of powerful evidence, none of the perpetrators has been brought to justice.

Fearing for his life because of threats of retaliation by Chechen authorities, Gadaev fled Russia in 2010, initially for Poland. In 2012, Polish authorities granted him asylum, but he continued to receive phone calls and messages, including from the police officers who had tortured him, with death threats and demands that he withdraw his testimony. As those who threatened him were aware of his whereabouts, Gadayev did not feel safe in Poland. In September 2012, he travelled from Poland to France and asked for asylum there. His asylum request and subsequent appeals were rejected, primarily on the grounds that he already had refugee status in Poland. In 2019, French authorities attempted to deport him to Poland, but the Polish government informed them that they had just revoked his refugee status.

In April 2019, French authorities ordered Gadaev to leave for Russia, his country of citizenship, but in June an administrative tribunal prohibited his deportation to Russia. Gadaev filed another asylum request, emphasizing that Poland no longer recognized him as a refugee. In October 2019, the French Office for Protection of Refugees and Stateless Persons (OFPRA) refused to review his application, alleging that his presence in France threatened “national security” but providing no detail. In November, Gadaev appealed that decision, and his appeal is currently pending, with the hearing scheduled for April 28.

In December, police authorities ordered Gadaev to leave France and proceed to Poland, citing the OFPRA decision he was in process of appealing. He immediately appealed the police order in an administrative court, but the court rejected his appeal.

Gadaev then filed an application with the French National Court of Asylum. In a ruling dated 10 March, the court ruled that Gadaev could not be deported to Russia as it would put his life and physical security at risk and he could not be sent to Poland as Polish authorities were not providing any guarantees of protection nor that they would refrain from sending him to Russia. The court specifically stated that the executive authorities should not take any steps with regard to Gadaev while his appeal of the OFPRA decision was pending.

However, on 8 April, police authorities seized Gadaev, despite the court’s ruling, and the next day forcibly put him on a Moscow-bound flight, denying him access to his French lawyer during the time he spent in custody.