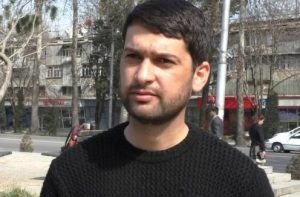 Authorities in Tajikistan must take urgent steps to ensure that independent journalist, Daler Sharipov, who is currently being held in pre-trial detention in the State Committee for National Security (SCNS), is protected from torture and other ill-treatment and released, Amnesty International, International Partnership for Human Rights (IPHR) and the Norwegian Helsinki Committee (NHC) said in a statement today.

On 28 January 2020, SCNS officials in Tajikistan detained Daler Sharipov for “inciting religious discord” under Article 189 of the Criminal Code (CC), a crime, which is punishable by up to five years’ imprisonment. Daler Sharipov, who frequently covered controversial issues such as human rights and religion and has criticized government policies in these areas, appears to have been charged in retaliation for his journalistic work. The broadly worded Article 189 has been used to place undue restrictions on the right to freedom of expression in a series of cases in Tajikistan, including that of journalist Khairullo Mirsaidov.

Daler Sharipov was refused access to his defence lawyer on 29 January and, on 30 January, he appeared at Ismoili Somoni District Court in Dushanbe, which ruled to place him in pre-trial detention for two months. On 1 February, the Prosecutor General’s Office issued a statement claiming that, in recent years, Sharipov has published more than 200 articles of “extremist nature aimed at inciting religious intolerance” and that he illegally published a dissertation which allegedly was “developed in the context of the Muslim Brotherhood movement”, which has been banned in Tajikistan as an extremist organization.

“Tajikistan is in the midst of a human rights crisis where the authorities have stifled all opposition and dissent – Daler Sharipov is one of the very few independent journalists remaining inside the country, and these charges against him demonstrate the lack of respect for freedom of expression in Tajikistan”, said Bjørn Engesland, Secretary General of the NHC.

Since 2015, Tajikistan has seen a marked deterioration in respect for the right to freedom of expression, including the curtailment of media freedom, silencing of government criticism, clamping down on the political opposition and limiting the space for civil society activism. In recent years, the Tajikistani authorities have imprisoned hundreds of people, including opposition party members, lawyers, journalists, peaceful activists and family members of dissenters. In Tajikistan, journalists who are critical of the government risk intimidation and reprisals from the law enforcement agencies and security services, including arrest, prosecution and imprisonment. The Tajikistani authorities frequently cite national security concerns to justify the restrictions of human rights.

It has become virtually impossible in Tajikistan to conduct journalistic investigations and publish articles on issues perceived to be “sensitive” by the authorities without endangering one’s own safety or that of family members.

In 2019, the UN Human Rights Committee expressed its concern about the “Harassment of independent journalists and media workers for critically reporting on State policies and on other matters of public interest, including through […] prosecutions on allegedly trumped-up charges”, and recommended that Tajikistan “Ensure the effective protection of independent journalists and media workers against any form of intimidation and refrain from using civil and criminal provisions, including the provisions on extremism, as well as other regulations, as a tool to suppress critical reporting on matters of public interest.”

Given the nature of the charges against him, Daler Sharipov is at imminent risk of torture. The SCNS has faced multiple allegations of using torture and other ill-treatment against detainees in order to obtain forced confessions. These include serious allegations that independent lawyer Buzurgmehr Yorov was tortured. Yorov was found guilty of similar incitement offences in a case believed to have been in retaliation for his work providing legal representation to individuals associated with the political opposition.

“We call on the Tajikistani authorities to guarantee Daler Sharipov’s safety, drop the charges against him and release him immediately. They must also ensure that he can freely exercise his right to freedom of expression”, said Brigitte Dufour, Director of IPHR.

Read the statement in pdf here.