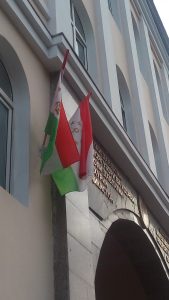 Conditions for civil society organisations in Tajikistan remain restrictive, a fact highlighted by representatives of the international community. On 9th March 2018, a high-level EU-Tajikistan Cooperation Committee meeting took place in Brussels. In a press release issued after the meeting, the EU stated that it had “raised the negative trend of a shrinking space for civil society in Tajikistan, emphasising that it was in the interest of long-term stability and economic development to allow the expression of diverse, democratic, political voices in the country”. Earlier, the UN Special Rapporteur on freedom of opinion and expression, among others, warned Tajikistan’s government that restricting fundamental freedoms in the name of ensuring national security is counter-productive.

In its 2018 Freedom in the World report, Freedom House again rated Tajikistan “not free“, with a score of 6 out of 7 for civil liberties (where 7 is the least free).

This update covers developments relating to civil society and civic freedoms in Tajikistan from January to March 2018. International Partnership for Human Rights (IPHR) and its partners from Tajikistan, Nota Bene and the Lawyers’ Association of Pamir, have prepared this report as part of their cooperation with the CIVICUS Monitor.

As covered in the previous update, independent journalist and head of the NTV comedy club team Hairullo Mirsaidov was arrested in December 2017 on charges of embezzlement, document forgery, falsely reporting a crime, as well as inciting national, racial or other hatred. The criminal case against Mirsaidov was opened after he appealed to President Rahmon, the Prosecutor General and Sughd’s Regional Governor, alleging corruption by the regional Youth and Sports Department in its dealings with the comedy club team he leads. International human rights NGOs denounced his arrest and Tajikistan’s NGO Coalition against Torture and Impunity called on the authorities to ensure that he is not penalised for his legitimate exercise of freedom of expression.

Also in February 2018, media reported that the head of the Sugdh regional Youth and Sports Department, whom Mirsaidov earlier accused of corruption, had been dismissed from his position. However, no further details about the dismissal were available.

Mirsaidov has worked as a correspondent for Tajikistan’s Asia Plus news agency, the regional Fergana News and Germany’s Deutsche Welle. The comedy club team he leads has represented Tajikistan in several international competitions held in the post-Soviet region.

The journalist’s lawyers have been requested to sign non-disclosure agreements and, therefore, are not able to publicly comment on the case.

Human Rights Watch has reiterated its calls on Tajik authorities to release prominent journalist Hairullo Mirsaidov, after his pretrial detention was extended by another two months. #rights https://t.co/q3iQD8SMq4 pic.twitter.com/kFjLgmorKE

As reported in the previous update, in December 2017 the government’s Communications Service required all mobile companies and internet providers in the country to disable so-called Next Generation Network (NGN) services. These services, which allow customers to make internet calls from abroad to Tajikistan at the rates of domestic calls, have been popular, especially among migrant workers and others living abroad. The Communications Service argued that NGN services threaten national security, while the Tax Committee called for restrictions on their use, saying it has resulted in decreasing tax revenues.

In another recent development, the Communications Service ordered all internet providers and mobile phone operators to obtain internet traffic services only from the state Tajik Telecom company, again with reference to national security considerations. Providers and media organisations expressed concern that this would result in monopolisation of internet traffic in the country and increased costs, as well as the potential for more internet outages affecting the whole country. Previously, most providers and operators bought internet traffic services from companies based abroad, which offer services at a lower cost than Tajik Telecom. A number of mobile phone companies asked the General Prosecutor’s Office to assess the lawfulness of the decision of the Communications Service. In addition, the companies asked the country’s Anti-Monopoly Service to assess the exclusive right of Tajik Telecom to sell internet traffic.

Already earlier reported, internet providers and mobile phone operators were required to channel all international traffic through a so-called Unified Communications Centre, which began operating under the state Tajik Telecom company in late 2016. There are concerns that this Centre has enabled the authorities to step up surveillance of mobile and internet communications, which may threaten freedom of expression and citizens’ right to privacy.

In mid-January 2018, the site of the Tajikistan weekly, tajikistantimes.tj, stopped working in the country. According to the news website’s representatives, the site was blocked by the government’s Communications Service without warning and they were not able to find out the reasons for this, in spite of several attempts to inquire. After a few days, the site became accessible again. The Communications Service stated that the site had stopped working for technical reasons and that access was restored as soon as the problems had been resolved. Tajikistantimes.tj is one of the oldest information portals in the country.

As covered in earlier updates, access to news and other websites has repeatedly and arbitrarily been blocked in Tajikistan.

As covered in earlier updates, a new draft Law on Non-Commercial Organisations is under consideration by the government. As of mid-March 2018, it had yet to be submitted to Parliament. Independent civil society organisations have not been invited to participate in the drafting process and have not been consulted on the wording of the draft legislation, although the new law will directly affect them.

At the beginning of 2018, civil society representatives were, however, invited to comment on another document with bearing on their work: new draft regulations on the preparation and submission of notifications to the Ministry of Justice about foreign grants. In accordance with amendments to the Law on Public Associations adopted in 2015, all NGOs registered as associations are required to notify the Ministry of Justice about funds received from foreign sources prior to using them. This information is included in a government register specifically created for this purpose.