Home 2022 The nexus of environmental issues, poverty, and political authoritarianism in Central Asia:... 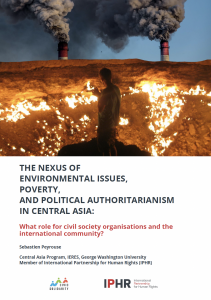 Over the past twenty years, environmental challenges have increasingly impacted populations across Central Asia, particularly affecting the most vulnerable, the poor, and the geographically isolated. Sources of pollution include industrial and agricultural production, untreated waste, radioactive tailings, soil salination, etc. In addition, Central Asia is already being impacted by climate change, which is expected to significantly worsen over the next decade. Floods, drought and landslides caused by temperature increases and the melting of Himalayan glaciers will constitute major threats to human security in the region.

The report is prepared by Sebastien Peyrouse, Central Asia Program, IERES, George Washington University, and Member of International Partnership for Human Rights (IPHR), in the framework of the CSP WG on Climate Justice.

While the vast majority of regions in the world face climate change, pollution and challenges related to natural resources, the specific issues and their intensity vary significantly from country to country. Central Asia faces not only the environmental problems of pollution and climate change, but also five factors specific to its history and current situation, which, if not addressed, will continue to impact the wellbeing and security of populations in the region.

Firstly, 30 years after the collapse of the USSR, Central Asian countries still struggle with the legacy of Soviet policy on the environment. Two of the most well-known of such issues are the drying up of the Aral Sea and the impact of nuclear weapons testing in northern Kazakhstan.

Secondly, since their independence, the countries of the region have continued to struggle to reform and develop their economies and their social welfare systems. Some, like Kyrgyzstan and Tajikistan, continue to be considered among the poorest countries in Asia. These difficult economic situations and limited state budgets have prevented governments of the region from making the necessary, substantial investments aimed at tackling environmental issues.

Fourthly, the authoritarian style of governance in Central Asian countries has had a detrimental effect in terms of how governments deal with environmental issues. Political authorities have sought to maintain control of environmental issues and those of climate change. However, political authoritarianism in the region has resulted in a significant disconnect between official narratives in support of environmentally-friendly policies, including joining international treaties, on the one hand, and minimizing, denying, or even censoring information on topics of concern, on the other.

Environmental projects are frequently subject to a top-down style of management, and some projects are undertaken so as to showcase the government’s stated commitment, but in fact end up harming the environment. This top-down approach, combined with a lack of funding, has greatly weakened research and contributed to Central Asian governments’ lack of preparedness to address increasingly problematic environmental issues.

Finally, the many obstacles faced by civil society in the region have further hindered action to address environmental issues. Throughout Central Asia political authorities restrict the activities of local and foreign civil society organisations (CSOs) to varying degrees, through restrictive laws, harassment, censorship, and even repression of environmental activists. Civil society has struggled to promote dialogue with the government or propose initiatives to address specific problems as CSOs in more democratic countries can.

Overall, the gap between governmental declarations of intent and the concrete implementation of proposals, combined with authoritarian obstruction of CSOs’ independent environmental research, as well as the serious lack of dialogue between civil society and political authorities, constitutes a serious threat to the environmental future of the region and, consequently, the economic and social futures of its population.