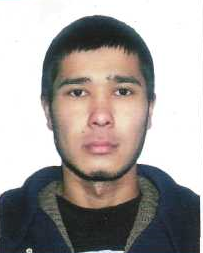 Twenty-four year-old Davron Komoliddinov is currently serving a seven-year sentence in Prison Colony 64/61 in the city of Karshi in southern Uzbekistan after being found guilty of crimes against the constitutional order in a trial that breeched international standards of fairness. There are serious concerns that Davron Komoliddinov has been subjected to torture and other ill-treatment in order to force him to confess to crimes he alleges he did not commit and that he remains at risk of such treatment.

Uzbekistani citizen Davron Komoliddinov was detained on 4 March 2015 by Russian law enforcement officials in the Siberian city of Krasnoyarsk, after an extradition request was received from Uzbekistan.  He was last seen by his family members in Russia in court on 27 March 2015. On 2 August, Davron Komoliddinov telephoned his relatives to inform them that he was being sent back to Uzbekistan but his exact whereabouts remained unknown until 18 September 2015 when his relatives were informed that he was being held in the basement of the Ferghana branch of the National Security Services (NSS) building in eastern Uzbekistan. Davron Komoliddinov’s relatives learnt later that from 2 August to 10 September 2015 he had been held in Tashtyurma, the notorious detention facility in Tashkent, capital of Uzbekistan.

Davron Komoliddinov was charged with incitement to ethnic, racial or religious hatred (Article 156); attempt on the constitutional order of Uzbekistan (Article 159) and establishment or participation in a religious extremist or banned organization (Article 244-2). The charges were based on testimony from two Uzbekistani citizens who had been arrested in Uzbekistan in October 2012. Davron Komoliddinov had been in contact with the two men in Russia three years earlier.

On 24 February 2016, Davron Komoliddinov’s brother visited him in Prison Colony 64/61 in Karshi and saw that Davron’s body was covered with sores and bruises and there are grounds to believe that Davron Komoliddinov was subjected to torture or other ill-treatment during his interrogation in order to force him to confess.  Davron Komoliddinov told his brother that during interrogation, he had asked the NSS officials to explain how and where he was supposed to have committed the crimes of which he was accused. In response, the NSS officials told him to sign the interrogation documents partially confessing his guilt and told him that matters would be examined in detail during the court hearing.

Davron Komoliddinov also told his brother that whilst in Russia he had accessed online sermons and teachings of religious leaders and performed namaz (Islamic prayers). In 2012, he had accessed information by independent Uzbekistani imams on YouTube and copied their photographs on to his social media page (Odnoklassniki – Classmates). These materials and sermons were not banned in Russia and when Davron Komoliddinov was arrested, Russian security officials confiscated his computer but found no banned or illegal materials.

During the investigation and trial, Davron Komoliddinov was represented by a state-appointed lawyer. On 10 November 2015, Fergana Regional Court found Davron Komoliddinov guilty on all three charges and sentenced him to seven years in prison. The court of appeal upheld the sentence on 19 January 2016. Neither Davron Komoliddinov nor his lawyers have been given a copy of the court verdict. NSS officials threatened Davron Komoliddinov’s relatives when they appealed to the Prosecutor’s office and the court to review the sentence, saying they would meet a similar fate to that of Davron if they did not cease their appeals

Association for Human Rights in Central Asia (AHRCA) and International Partnership for Human Rights (IPHR) are concerned that Davron Komoliddinov was subjected to torture or other ill-treatment in order to force him to confess to crimes he did not commit.  Davron Komoliddinov’s right to a fair trial has been violated and he was not provided with effective and independent legal defence. A pattern of repression and reprisals against defence lawyers who act for people suspected of criminal offences related to national security in Uzbekistan has been well documented.[1] There are credible reports of torture and ill-treatment being used in Uzbekistan against those suspected of crimes against national security, particularly in pre-trial detention but also in prison.

Davron Komoliddinov’s case reflects a pattern of persecution by the Uzbekistani law-enforcement authorities of Uzbekistani citizens who travel to work in other countries of the Commonwealth of Independent States (CIS).

Often, upon arrival in Russia, in order to reduce living costs migrants share housing and places of work. AHRCA has observed that Uzbekistani law enforcement officials frequently use the fact of communal living arrangements to accuse labour migrants of establishing a criminal group and of distributing banned literature. The law enforcement officials pressure one or two members of the group of migrants to testify against their co-workers, who are then included on the Interpol International wanted lists, and in many cases are then arrested, extradited to Uzbekistan and sentenced to long terms of imprisonment. This is what happened in Davron Komoliddinov’s case. Usually, those migrants targeted have lived in Russia legally for at least three months. When they hear from relatives in Uzbekistan that the security services have asked questions about them, they go into hiding in Russia and therefore do not continue to complete formalities to prolong their legal stay In processing extradition requests in cases of forcible returns, Russia continues to prioritize regional cooperation agreements such as the Shanghai Cooperation Agreement and the Minsk Convention on Legal Assistance and Legal Relations in Civil, Family and Criminal Matters, over their international obligations to prevent return of anyone to a country where they are at real risk of torture, leading to an increase in such cases.

AHRCA and IPHR call on the Uzbekistani authorities to: