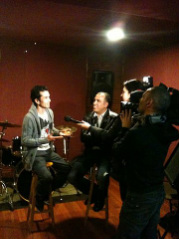 International Partnership for Human Rights (IPHR) welcomes the release of Turkmen pop singers Maksat Kakabaev and Murad Ovezov, who were imprisoned in February 2011. According to information obtained by Turkmen Initiative for Human Rights, an IPHR partner organization, the two singers were released in connection with the Turkmen Flag Day celebrations last week and are now at home with their families in Ashgabat and Mary, respectively.

Maksat Kakabaev (known under his artist name Maro) and Murad Ovezov have made a career performing pop songs rather than patriotic music of the kind favored by the Turkmen government. They were summoned and arrested by police in early 2011 following a concert and an interview to a local TV channel in Turkey. During their arrest, they were reportedly verbally and physically abused. They were subsequently convicted and imprisoned on charges believed to be politically motivated in separate criminal cases. Turkmen Initiative for Human Rights has not been able to confirm the exact nature of the charges against the two men or the length of the sentences they were given. It also does not have information about the current whereabouts or fate of Kakabaev’s relatives (his father, brother and brother-in-law) who were reported to have been convicted together with him.

Human rights NGOs have called for the release of the two singers and their cases have been raised by representatives of international organizations. Earlier this month a group of Members of the European Parliament made an appeal on their behalf in a joint letter to Turkmenistan’s Brussels ambassador.

In another recent development, Turkmen civil society activists Sapardurdy Khajiev and Annakurban Amanklychev were released on 16 February 2013 after their prison terms ended. These two men were imprisoned on trumped-up charges in 2006.

While relieved that these singers and activists have been freed, IPHR urges Turkmenistan’s international partners to continue to call for the release of other individuals who have been imprisoned for political reasons in the country.

One of of Maro’s songs can be watched here.