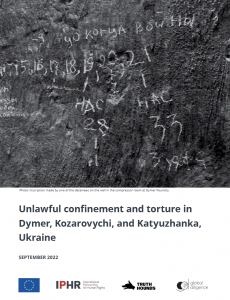 Truth Hounds and International Partnership for Human Rights (IPHR) conducted a fact-finding mission to Dymer, Kozarovychi, and Katyuzhanka in July 2022. Members of the fact-finding team interviewed over a dozen local residents who were either victims of or witnesses to the events described in this report.

Several Ukrainian and international NGOs and media outlets have covered stories of detention, ill-treatment, torture, deportation, and disappearance of Ukrainians from Kozarovychi and Dymer. This report corroborates these reports and provides further detail and analysis of alleged crimes committed in Kozarovychi, Dymer, and Katyuzhanka.

There are strong reasons to believe that at least eight of the eleven cases of detention of civilians analysed in this report amount to the war crime of unlawful confinement. There are also strong reasons to believe that all 11 detainees were subjected to inhuman conditions of detention and that the cumulative effect of inhuman detention and physical and/or psychological abuse of the detainees constitutes the war crime of torture.

Dymer is a small settlement located 50 km to the north of Kyiv. Its pre-war population was approximately 6 000 people. Kozarovychi is an even smaller settlement of around 2 000 people, located 5 km south of Dymer. Both settlements are located in Vyshhorod Raion, which borders the city of Kyiv to the south and the Chornobyl Exclusion Zone to the north. Katyuzhanka is located 14 km west of Dymer and 60 km north of Kyiv. It sits on two key roads connecting Belarus and Kyiv. Katyuzhanka had a pre-war civilian population of approximately 4 000 people.

Following the Russian occupation of Dymer, Kozarovychi, and Katyuzhanka between 26 and 28 February 2022, Russian forces began searching homes and arresting local residents in a bid to solidify the occupation and suppress any real or perceived resistance on the part of the local population. In the beginning of March 2022, they used two industrial sites in Dymer and Kozarovychi, as well as a pit in the forest near Katyuzhanka, as places of confinement. All three sites exhibited inhuman detention conditions and were used by Russian forces for incommunicado detention, ill-treatment, and the torture of dozens of local residents. Most of the captives held at these locations returned home after Russian armed forces withdrew from the area in late March 2022. However, the whereabouts of at least two captured civilians remain unknown. Several witness accounts state that they were detained by Russian forces and likely transferred to Russia. There is so far no official information concerning their exact whereabouts and treatment.