Congress should press for further reforms 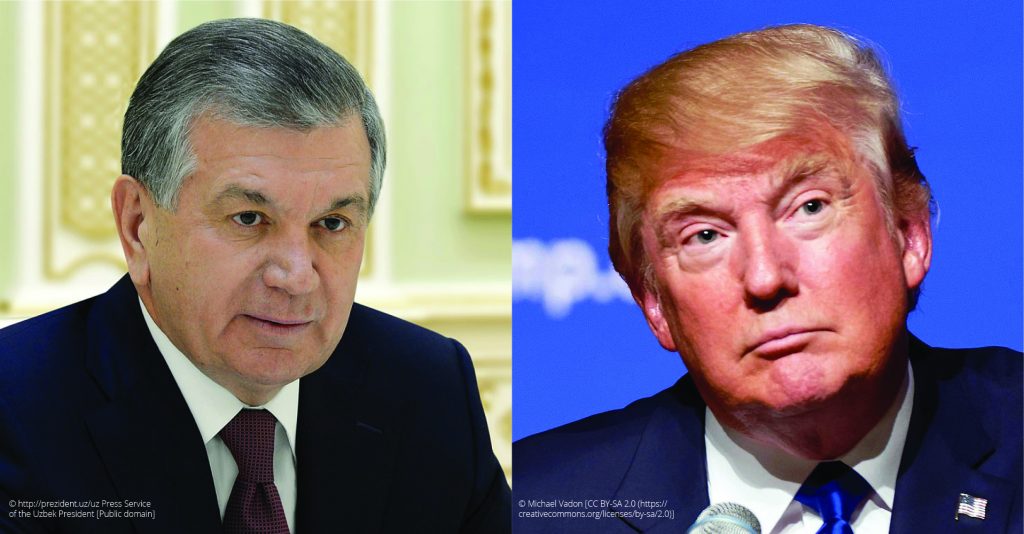 Uzbekistan’s president’s meeting with President Donald Trump on May 16, 2018, comes at a time when the Uzbek government has taken steps to improve human rights but needs to translate them into sustainable, structural improvements, 12 human rights organizations said today.

Since assuming the presidency in September 2016 after President Islam Karimov’s death, Shavkat Mirziyoyev has ordered the release of at least 28 political prisoners, including 10 journalists, relaxed certain restrictions on free expression, and publicly spoken on the need to rein in the country’s feared security services and to end forced labor in the country’s cotton fields. Such moves have offered hope that Uzbek authorities could meaningfully improve the country’s human rights situation and carry out sustainable reforms. But egregious rights abuses, including internet censorship, politically motivated imprisonment, torture, a lack of competitive electoral processes, and a lack of justice for serious past abuses remain to be addressed.

“At this hopeful time for Uzbekistan, the government should ensure that the modest steps already taken in the right direction lead to enduring and effective human rights protection for all of Uzbekistan’s citizens,” said Steve Swerdlow, Central Asia researcher at Human Rights Watch. “The US Congress should make clear that reform it can believe in requires sustained concrete changes.”

Congress has long sought to address Uzbekistan’s severe human rights situation through the conditioning of US military assistance in the Foreign Appropriations Act on efforts to combat torture and release political prisoners. It has also provided special scrutiny of Tashkent’s adherence to religious freedom principles through the US Commission on International Religious Freedom.

On May 7, a Tashkent court acquitted three people accused on politically motivated charges of conspiring to overthrow the government. It convicted the fourth defendant, Bobomurod Abdullaev, an independent journalist, but fined him without imposing a prison sentence. On May 12, the authorities also freed a labor rights and political activist, Fahriddin Tillaev, imprisoned since 2013. But thousands of people imprisoned on politically motivated charges, including for extremism (articles 159, 216, 244-1, and 244-2 of the Criminal Code), remain behind bars.

Human rights groups urged members of Congress to raise these cases during Mirziyoyev’s White House visit and to call on the Uzbek government to immediately release everyone imprisoned on politically motivated charges, providing them with full rehabilitation and access to adequate medical treatment. Members of Congress should once again remind the US administration that human rights should be a core pillar of US foreign policy, including in bilateral discussions with Uzbek government officials.

The groups also said that the Uzbek government should amend its criminal code provisions relating to extremism that are commonly used to criminalize dissent (Articles 159, 216, 244-1 and 244-2), and to bring the criminal code into compliance with Uzbekistan’s international human rights obligations.

“We are heartened to see the release of long-held activists,” said Nadejda Atayeva, president of the Association for Human Rights in Central Asia. “To ensure lasting change, the repressive legal framework used to persecute and imprison peaceful activists and religious believers on ill-defined charges of extremism for so many years should be changed for good.”

In November 2017, Mirziyoyev signed a decree prohibiting the courts from using evidence obtained through torture, and forbidding legal decisions based on any evidence not confirmed during trial. The decree, which came into force in March, states that prosecutors will be required to check whether physical or psychological pressure was exerted on a defendant or their relatives. If enforced, the decree could help prevent torture and other ill-treatment in detention in Uzbekistan.

Uzbek officials have indicated an openness to cooperate with United Nations experts by inviting those who have requested access to the country to visit. The US Congress should urge the Uzbek government to combat systematic torture by allowing the UN special rapporteur on torture to visit the country during 2018, closing Uzbekistan’s Jaslyk prison, and ratifying the Optional Protocol to the international Convention Against Torture – all longstanding recommendations by UN bodies, the groups said.

“It is important that Uzbek officials have acknowledged the importance of the work by UN experts and human rights groups,” said Kate Barth, legal director at Freedom Now, “but Tashkent should follow through on longstanding recommendations to allow in the UN’s expert on the prevention of torture, close the notorious Jaslyk prison, and ratify Torture Convention’s Optional Protocol.”

May 13 marked 13 years since Uzbek government forces shot and killed hundreds of largely peaceful protesters in the eastern city of Andijan following mass protests connected with the trial of 23 local businessmen on charges of Islamic extremism. The government has never acknowledged the full scale of the killings nor the persecution of witnesses, journalists, and other human rights activists who reported on the events. Hundreds of people convicted in flawed trials after the protest remain in prison and hundreds more who fled the country have been unable to return home.

“We welcome the pace of changes in the country, but more needs to be done to improve Uzbekistan’s tarnished human rights record,” said Muzaffar Suleymanov, Eurasia program officer at Civil Rights Defenders. “It is important that President Mirziyoyev addresses the 2005 Andijan events, rehabilitates all of our formerly imprisoned colleagues, unblocks access to critical news outlets and brings back all international news bureaus that were expelled after the Andijan events. The country would further benefit from unimpeded working visits by all signatories to this letter.”