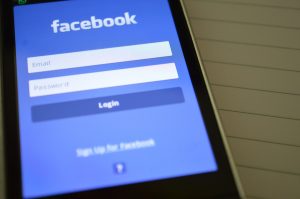 From 24 August to date sources in Uzbekistan have informed our organizations that dozens of people have been arbitrarily detained throughout the country and held on administrative charges after they posted comments on their Facebook accounts or ‘liked’ and shared posts of other social media users.

All the comments appear to relate to cultural and religious issues that the authorities in Uzbekistan consider particularly sensitive, such as the wearing of hijabs (Islamic headscarves), which is prohibited in places of work or schools in Uzbekistan.  We are concerned that the authorities in Uzbekistan are trying to clamp down on any discussions on social media critical of the government’s cultural and religious policies and legislative initiatives.

Nine of those who were detained are known to be Adham Olimov; Otabek Usmanov; Miraziz Ahmedov; Ziyovuddin Rakhim;  Tulkin Astanov; Turabek Baimirzaev; Dilshod Khalilov; Khurshidbek Mukhammadrozykov; and Erkin Sulaimon. Police also briefly detained and questioned three people for four to five hours: Shokir Sharipov (uses name of Muhammad Shakur on the internet); Iskander Sadirov and Malokhat Anvarova (uses name of Ummu Abbos on the internet). According to media reports, several of the Facebook users detained were released from custody on 11 September, including Miraziz Ahmedov, Adham Olimov and Dilshod Khalilov, although their computers and telephones were not returned to them.

Several of those detained signed statements undertaking not to participate in any further “suspicious” activities – but without receiving an explanation from law enforcement officials as to what qualifies as “suspicious”.  In addition, “suspicious” is not a legally defined term and does not refer to any internationally recognised offence; hence the demand is an arbitrary restriction of the right to freedom of expression.

According to our information, the authorities tracked Facebook users by their IP addresses and then dispatched police officers from the regional anti-terrorism units of the Ministry of Internal Affairs to detain them, search their homes and confiscate computer and technical equipment, in most cases without presenting arrest or search warrants. In the cases we are aware of, interrogations at police stations lasted for four hours or more without any legal representatives present and relatives of those detained were not informed of their whereabouts. The charges were often excessive in terms of the alleged offence – for example, someone trying to organize a small-scale protest (picket) was charged with calling for mass unrest.

According to information we have received from sources who cannot be identified because of security concerns, law enforcement officials have arbitrarily charged some detainees with  ‘failure to comply with the lawful demands of a police officer’ under Article 194 of the Code of Administrative Offences. In some of these cases the officers themselves had exceeded their authority and verbally insulted and physically assaulted detainees and subjected them to ill-treatment.

The cases highlighted below show to what extent the Uzbekistani authorities closely monitor social media networks and react to critical posts by private individuals concerning, for example, the prohibition of wearing a hijab or initiatives to hold small scale protests.

Shokir Sharipov – (pseudonym Muhammad Shakur) was arrested on 25 August 2018. He lives in Tashkent region and has 4,879 “friends” on Facebook and 753 followers. He is a wheelchair user. Eight officers from the Department of Internal Affairs of Kibraisky District, Tashkent came to his home to arrest him and take him to the police station. During detention he was reportedly ill-treated, threatened and insulted. His computer, phone and other equipment were confiscated without any warrant or him being given a receipt. Several hours later he was taken back home. According to media reports he was accused of “inciting mass unrest” and “residing without a residence permit”. 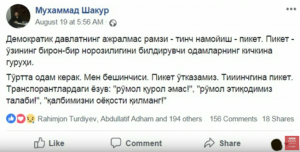 Central to a democratic state are – peaceful demonstrations -pickets. A picket is the expression of any protest by a small group of persons. Four people needed. I am the fifth. We will hold a picket. A peaceful picket. The banners will read: “A headscarf is not a weapon!”, “A headscarf is a requirement of our faith!”, “Do not trample on our souls!”

Nearly 200 Facebook users ‘liked’ this post and discussions and began sharing it. Legislation in Uzbekistan does not prohibit calling people to attend a picket, which may be the reason that Shokir Sharipov was charged with calling for mass disorder.

Adham Olimov, (internet name Musanif Adham), has 5,601 subscribers to his personal page. He writes about socio-political problems as well as issues of a spiritual and moral character and comments on changes in society. He was arrested by one police officer and eight officials from the Olmazar District Department of Internal Affairs on 28 August at 6:40 pm at his home in the Almazar district of Tashkent.  On 29 August he was sentenced to 15 days’ detention by Almazar Administrative Court for the administrative offences of “failure to comply with the lawful requirement of a police officer” and “obstructing the work of police officers”. Adham Olimov is currently in custody.

Otabek Usmanov is from Andijan. He came to the attention of the authorities because of his posts on spiritual and moral issues, such as government-imposed restrictions on children being allowed to attend the mosque. According to Fergana News, he was detained at his work at General Motors in Andijan region by representatives of the Ministry of Internal Affairs and held in a cell with a group of women who started an argument with him and lodged a complaint against him with the regional prosecutor’s office. Following the complaint, on 29 August law enforcement officials in Andijan charged him with petty hooliganism and detained him for 15 days.

Ziyovuddin Rahim: Ziyovuddin Kabirov writes under the name Ziyovuddin Rahim and is a theological scholar and author of over 20 religious books. He has 4,975 “friends” and 3,260 followers on Facebook. In his posts he writes about spiritual and moral issues. Little information is available about his detention although it is known that his house was searched when he was arrested and that he is still under arrest at the time of writing.

Additionally Facebook user Tulkin Astanov is known to have been arrested on 24 August and held for ten days in administrative detention.

The whereabouts of Miraziz Ahmedov were unknown for ten days. On 2 September,he wrote on his Facebook page “I’ve been summoned to the police. Pray for me.” The same day he complied with a summons to the district police office and was not seen until he was released on 11 September. News agency Ferghana.Ru quotes sources as saying he is being held at the Department of Internal Affairs in Tashkent.For more than 15 years, Miraziz Ahmedov worked as an interior designer and founded the Miraziz Design Group.In the autumn, this studio planned to open design schools in several cities in Uzbekistan.

He repeatedly spoke about religious topics on Facebook. For example, in response to a government resolution on the introduction of a standard countrywide school uniform, he wrote that if his daughter was forbidden to wear a headscarf to school, she might not attend. He repeatedly condemned what he regarded as the hypocrisy of religious debates and called on users to join a group to defend the rights of Muslims in Uzbekistan.

Although information about the detentions of these users of social networks continues to arrive from Uzbekistan, it has proved difficult to follow up the current situation of those in detention and even of those briefly detained, as they decline to comment. Their families have likewise declined to speak about the detentions. We are concerned that this indicates that they have been put under pressure by the authorities not to speak to media or human rights observers.

We call on the Uzbekistani authorities to: