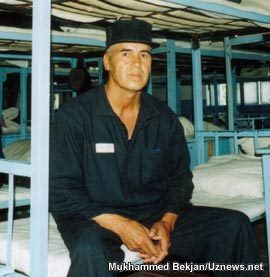 Bekjanov, 62, has been in prison for 17 years, and the move could be a sign that the government is preparing to extend his prison term yet again. He is in very poor health and his condition could decline rapidly in solitary confinement, the groups said. The Uzbek government and President Shavkat Mirziyoyev should ensure his immediate and unconditional release.

“Muhammad Bekjanov’s solitary confinement is an ominous sign that causes us to fear that his health could deteriorate and that his sentence could be extended again,” said Nadejda Atayeva, the head of the AHRCA. “The international community must do everything in its power to save him.”

The onetime editor of what was Uzbekistan’s leading opposition newspaper, Bekjanov has been imprisoned since 1999. He was awarded Reporters Without Borders’ Press Freedom Prize in 2013.

He is being held in Prison No. 48, in Zarafshon, in the central Navoiy region. When his brother, Jumanazar Bekjanov, tried to visit him there on December 13, 2016, prison officials said he was in solitary confinement and would not be able to receive a visitor until January 10, 2017. No one at the prison would say how long he had been in solitary or why he was being held there.

The sentences of political prisoners are often arbitrarily extended in Uzbekistan on the ground that they allegedly violated article 221 of the criminal code by “refusing to comply with the prison administration’s legal requirements.” These additional sentences are typically imposed on the basis of false testimony and without due process. Prisoners can be given successive sentence extensions that in practice amount to life in prison.

Bekjanov, who has a wife and three children, has already been a victim of this practice. He was given an additional sentence of four years and eight months in February 2012, just days before he was due to be released.

“The Uzbek authorities have already stolen Muhammad Bekjanov’s health and 17 years of his life,” said Johann Bihr, the head of RSF’s Eastern Europe and Central Asia desk. “How much more time will they continue to persecute this journalist, whose only crime was to have done his job in an honest and courageous manner?”

The groups also noted that an amnesty passed by the Uzbek senate on October 12 applies to prisoners over the age of 60 and should therefore be applicable to Bekjanov, who ought to be freed without delay. However, political prisoners have usually been excluded from the amnesties that have been issued in recent years.

“The immediate release of Muhammad Bekjanov and others imprisoned for the exercise of freedom of speech, would be a positive sign by the new president, Shavkat Mirziyoyev, that he is looking to pursue reform and reverse Uzbekistan’s terrible human rights record,” said Steve Swerdlow, Central Asia researcher at Human Rights Watch. “It would show that Uzbekistan’s new leader is willing to end impunity for the abuses committed during Islam Karimov’s long reign,” added Brigitte Dufour, director of IPHR.

As the editor of Erk (Freedom) in the early 1990s, Bekjanov tried to initiate a debate on such taboo subjects as the state of the economy, the use of forced labor in the cotton harvest and the Aral Sea environmental disaster. His brother, the well-known poet and government opponent Muhammad Salikh, was the only person to run against President Karimov in the December 1991 election.

Karimov took advantage of a series of bombings in Tashkent in 1999 to silence outspoken critics by prosecuting them as accomplices to the attacks. Like many pro-democracy activists, Bekjanov was tried in this way and sentenced to 15 years in prison. Yusuf Ruzimuradov, a fellow Erk journalist who was arrested at the same time as Bekjanov, is also still in jail.

Bekjanov has been repeatedly tortured in prison. He has lost many teeth and much of his hearing as a result of mistreatment and a serious case of tuberculosis that was left untreated for a long time.

In recent years, he has suffered from intermittent acute pain as well as permanent discomfort from an inguinal hernia that developed when he was assigned to prison work making bricks. He has refused to undergo an operation because operations in prison are usually carried out with no anaesthetic and little hygiene.

After repeatedly refusing to allow the lawyer appointed by his family, Polina Braunerg, to see Bekjanov, the prison authorities finally told her earlier this year that she needed to show a letter from him requesting her visit. But this is impossible because he does not know that she is acting as his defence lawyer.

Braunerg is herself now being harassed by the authorities. She has been constantly followed for the past two years or so, and has not been allowed to travel abroad for medical treatment.

Uzbekistan is ranked 166 out of 180 countries in RSF’s 2016 World Press Freedom Index. At least nine other journalists are currently jailed in Uzbekistan connection with their work. Many opposition politicians, human rights defenders and other civil society representatives languish in prison, along with thousands of people arbitrarily accused of “religious extremism.”

Islam Karimov, who ruled Uzbekistan from independence until his death in August, was succeeded by former Prime Minister Shavkat Mirziyoyev after an election that the Organization for Security and Cooperation in Europe said was “devoid of genuine competition.”