Home 2021 Violations of the rights of creative professionals, activists and artists during the... 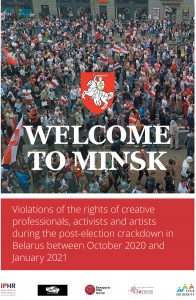 This joint report by Belarusian PEN Centre, Civic Solidarity Platform (CSP), International Partnership for Human Rights (IPHR) and Truth Hounds, presents information obtained from monitoring by Belarusian PEN Centre as well as other local and international human rights defender organisations and provides an assessment of the human rights violations against creative professionals, activists and artists by the Belarusian authorities in response to the post-election protests in Belarus. The report focuses primarily on events documented between October 2020 and January 2021.

Artists have been amongst the key actors in the post-election events in Belarus. Whether participating in mass demonstrations, or holding individual/group acts of protest, artists have significantly raised the publicity and impact of the protest movement. Yet, due to the increased public attention, artists have also become targets for “exemplary punishment” by the state authorities and security services.

The violations documented by human rights groups during the post-election protests include: violations of the right to freedom of peaceful assembly and expression; the use of excessive and unreasonable force to disperse predominantly peaceful protests; arbitrary and/or unlawful detentions of protestors and bystanders; torture and ill-treatment in detention; overcrowded detention facilities, including deprivation of access to food, drinking water and adequate sanitation facilities; violations of international fair trial standards during court hearings held inside detention facilities and behind closed doors.

Artist and community teacher Raman Bandarenka died in custody after he was beaten by police officers on 11 November 2020. To date, the authorities have failed to promptly and impartially investigate allegations of torture and ill-treatment and bring the perpetrators to justice as required by the UN CAT and other international human rights treaties ratified by Belarus.

In fact the Prosecutor’s Office and the Investigative Committee have not opened a single criminal investigation into the numerous allegations of systematic and widespread torture of protestors in detention. At the same time, law enforcement officials continue to use torture and cruel, inhuman and degrading treatment against detained protesters.

Finally a large number of artists and creative professionals have been dismissed from their workplaces or forced to resign after they publicly expressed their political views. At least 140 students and at least 15 academics have been dismissed from Belarusian universities due to their active civil position and participation in the peaceful protests, including students and academic staff of the Belarusian State Academy of Arts.

We are very grateful to Jura Ledyan for providing his powerful artworks for this report!