Home 2021 Far-right and religious extremist groups attack activists and journalists in counter-protest against... 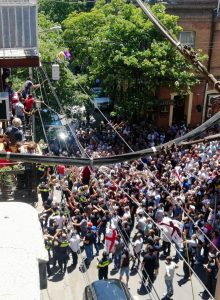 The “March of Dignity” planned for 5 July  2021, as part of Pride week organised by the Tbilisi based LGBT+ organisation ‘Tbilisi Pride’ was cancelled today after violent attacks took place across the capital city of Georgia. The organisers cancelled the event after several hundred far-right extremists patrolled the city in groups verbally abusing and physically attacking journalists, activists and civilians and people that they perceived as such. The police, significantly outnumbered, were unable to ensure the protection of peaceful pedestrians and professionals working in various locations in central Tbilisi.

The violent extremist groups began gathering at Rustaveli Metro on the night of 4 July and spent the night in tents, intending to prevent any March of Dignity activists from gathering. The situation was tense from the early hours of the morning and escalated in the afternoon after Prime Minister Gharibashvili made a public statement calling the March of Dignity “unreasonable” and “confrontational”. The prime minister also blamed the organisers for cooperating with the National Movement (the former ruling party before the Georgian Dream came into power in 2012) and condemned them for “aim[ing] to spark tension and destabilisation in the country”.

The violent attacks are still ongoing at the time of writing, and it is known that several journalists were beaten and a tourist was stabbed in the center of Tbilisi for wearing an earring. The violent mobs broke into the office of Tbilisi Pride and destroyed it and several local and international organisations’ offices were also attacked. Extremists destroyed the tents of peaceful protesters in front of the Georgian Parliament. They are patrolling the city and searching for anyone who looks like an LGBT+ activist or a supporter.  The Georgian Orthodox Church, which was active in  mobilising its supporters from the regions, held a service celebrating their victory in “protection of Georgian dignity”.

Until now there have been no reports of arrests or reactions from the government on today’s events. There is no information that any one from the violent anti-lgbt groups has been arrested despite multiple sources of video footage showing clearly identifiable perpetrators. The police were significantly outnumbered during the attacks throughout the day.

IPHR condemns the failure of the Georgian government to provide sufficient protection to activists, journalists and peaceful protestors from anti-lgbt attacks. We call on the government to publicly condemn the violent attacks, to instigate a swift and effective investigation to identify the perpetrators and to ensure that they are brought to justice.